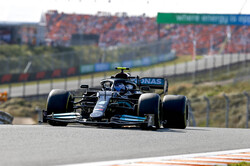 Valtteri Bottas has denied that he ignored team orders in posting the fastest lap during the Dutch Grand Prix.

Any remaining doubt that Valtteri Bottas' tenure at Mercedes is coming to an end was surely swept away on Sunday afternoon.

An extended opening stint saw the Finn leading the race after teammate Lewis Hamilton pitted on lap 20 and Max Verstappen a lap later.

Whether it was Mercedes intention to have Bottas back Verstappen into Hamilton's clutches isn't clear, but just 8 laps after his stop the Dutchman overhauled the Finn who promptly pitted.

For the rest of the afternoon Bottas ran a lonely race in third, occasionally getting a gee-up from his team.

On Lap 67, Bottas made his second stop of the afternoon, switching from mediums to softs, as it appeared he was seeking the point for fastest lap.

However, aware that Hamilton was losing touch with Verstappen, Mercedes opted to pit the Briton for a third time to allow the world champion the bonus point.

Meanwhile, having posted fastest times in the opening two sectors, Bottas was told by strategist James Vowles to abort the lap, and though the Finn did indeed slow his lap was still the quickest.

As it happened, on the final lap Hamilton went quicker, and thereby earned the point, however by that time many felt the damage had been done, and that Bottas was making a point – if you'll pardon the pun.

Not so, he insists.

"There was quite a big gap ahead, a big gap behind, so for safety reasons it was good thing to stop," he told reporters. "I think I could have made it to the end much faster than then by stopping, but in the end the position was the same, so it was the safer option to stop at the end.

"I thought initially we would stop for the fastest lap," he added, "but then also Lewis had a gap so Lewis stopped.

"So yeah, I mean, I was pushing on the first lap, sector one, two, like flat-out and then they started asking me to slow down at the end of the lap, and I was just playing around really.

"Obviously Lewis needs that one extra point more than me. He's fighting for the World Championship, and as a team we're trying to get the maximum points, so that's how it is."

Asked if he was aware the Bottas had pitted and was going for the fastest lap, Hamilton said: No idea.

"I didn't even know that Valtteri had stopped, I was completely unaware of that," he insisted. "It was my choice to stop, I needed that extra point, so I did."

"That was a bit cheeky, but understandable," team boss, Toto Wolff subsequently told Sky Sports. "Valtteri is always on the receiving end because this championship is so tight.

"He lifted off massively in the last sector, and it was clear that Lewis would do the quickest lap and Valtteri knew about it.

"At the end, Lewis in his fight for the drivers' championship got the point, and it's all good.

"It could have ended up in a loss of a point for Lewis, and it would have also been not right, because he had fastest lap until then," said the Austrian. But you have to understand also at that point, there's a certain degree of frustration of Valtteri, and at the end, everything is good.

"We're going to talk about it, but in a most amicable and professional way."