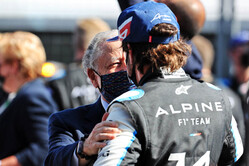 Proving that there remains plenty of life in the old dog, Fernando Alonso admits that he was "lucky" in a race which saw him take a lot of risks.

Perhaps it was the partisan crowd bringing back memories of his early days when his countrymen abandoned MotoGP for F1 now that they finally had a local hero to cheer, or perhaps he merely had a point to prove. Either way, the Dutch Grand Prix was further proof that Fernando Alonso has lost none of his flair or guile.

Another brilliant start saw him overtake his teammate, the pair banging wheels in Turn 1, before the Spaniard had a similar close encounter with Antonio Giovinazzi in Turn 6.

Teammate Esteban Ocon, feeling he was quicker, subsequently called on his team, however Alonso insisted that he had the pace but didn't want to get too close to the car ahead, Carlos Sainz.

In the closing stages of the race, the Spaniard once again found himself behind his countryman's Ferrari, and making full use of his faster, fresher mediums, passed the SF21 to claim sixth.

That’s the basics, for appearing to have enjoyed the afternoon as much as Max Verstappen, Alonso admits that it was a race in which risks had to be taken.

"The first lap we took many risks as we felt necessary as we knew it was very important to stabilise the positions," he admitted. "The plan was to go on the outside because I was on the clean side of the grid and I wanted to have a straight start with not much movement, to try to go on the outside of Turn 1, but Giovinazzi had the same plan so he was on the outside and blocking a little bit my idea.

"So after that I had to improvise a little bit into Turns 2 and 3," he continued, "there were a lot of cars, I was even in the grass at one point.

"In Turn 3 I chose to run on the outside and I kept good momentum on the exit but Carlos was in the middle in the way so I had to brake at the exit of Turn 3 which didn’t help but then Giovinazzi and Carlos were fighting until Turn 7 and I could squeeze one position.

"I think I had been hit by Esteban in Turn 1, by Russell in Turn 2 and by Giovinazzi in Turn 6," he said. "So I had very robust tyres today with no punctures so that was good."

As if that wasn't enough, the two-time world champion admitted that he almost brushed the walls in his move on Sainz later in the race.

"I had a go into Carlos like six laps from the end at Turn 1, on the inside, and I thought I was making the move and in the last moment he released the brakes and braked even later so we nearly touched in Turn 1.

"Into Turn 3 I was too close, so I locked the fronts a little bit and I ran wider than normal, I was outside of the circuit but obviously there are like two metres from the banking to the wall and I was about 10cm or something from the wall with both front tyres locked up.

"So it is not that I did anything magic there, it was just pure luck as I was not in control of the car. I got lucky there."