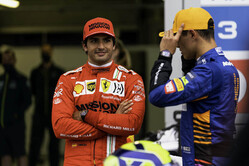 Carlos Sainz and Scuderia Ferrari Mission Winnow put on a great performance in qualifying for the Russian Grand Prix at Sochi. The Spaniard secured the best result of his Formula 1 career, qualifying on the front row for the very first time. Charles Leclerc only took part in Q1, even though he made it through to the next part, given that he starts from the back of the grid tomorrow because of taking on a new power unit. He just did a few laps to get a feel for the SF21 on a wet track.

In Q3, some parts of the track were still damp, but a dry line was emerging. Carlos put in a timed lap on intermediate tyres but then he and the team chose the almost perfect moment to switch to slicks. Carlos pitted to take on a set of new Softs, going back out knowing he had enough time to do two warm-up laps to get the tyres up to temperature. With just seconds remaining before the chequered flag, he started a flying lap right on the limit, setting an excellent time of 1'42"510, for which he was eventually rewarded with second place on the starting grid.

Scuderia Ferrari thus has its cars at opposite ends of the grid, with Carlos at the front and Charles at the back of the pack. They can both expect a tough Sunday, with Sainz trying to maintain position, while on the other hand, Charles will be attacking as much as possible, trying to work his way up into the points. The start is at 15.00 local (14.00 CET) and the forecast is for variable conditions, although the current prediction is that it should not rain.

Carlos Sainz: It's been a tough quali session but I'm proud how we managed the situation to end up putting a great lap together for P2. I like these tricky conditions and I really enjoyed that last attempt on the slicks. We were one of the first ones to cross the line and the wait until P2 was confirmed was tense, as the track was drying quickly! Front row for tomorrow is a good result, and I'm happy, but I would have preferred to keep pole!

Tomorrow it's very likely to be dry and we had a decent pace yesterday. Graining on the front tyres will be challenging but I will give it all from the very first lap until the end. Congrats to Lando on his first pole! It's good to start beside him.

Charles Leclerc: The conditions today were not ones we experience very often during a season, but they are those with which, recently, we have struggled the most. So, despite knowing that we would start from the back row tomorrow, we decided it was a good opportunity to get out, rack up some mileage and learn for the future. I think we achieved that goal today.

I really enjoyed driving, as the track had very high grip in the rain and we were quite competitive right from the start. That was good to see. I'm happy for the team and Carlos for the good result today and we will both give it our all in the race.

Laurent Mekies: A very closely contested qualifying, run in very tricky track conditions, ended with one of our drivers on the front row of the grid. Carlos did a very good job on his final lap on dry tyres, as it really wasn't easy to find the right feeling in these conditions. The team worked well with the driver, making the right choices at the right time.

Charles' qualifying was obviously conditioned by the fact that, because of his penalty, he will start from the back of the grid. The choice we made comes at a heavy cost for now, but it will pay off in the coming races. We decided he should at least go out in Q1 so he could check the handling of his car in the wet and in fact Charles was very competitive. Tomorrow we will start from opposite ends of the grid with Carlos on the front row and Charles on the last one. As usual, our aim is to get the best possible result, trying to make the most of any opportunity that comes our way.