Leclerc has no regrets 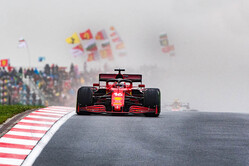 One of three drivers who sought to get to the end of the race on the set of Inters on which he started, Charles Leclerc insists he has no regrets.

Having inherited the lead when Max Verstappen and then Valtteri Bottas pitted, Leclerc subsequently asked his team if he could make it to the end without stopping.

Eight laps later, as Bottas closed in to retake the lead the Monegasque was told to pit, rejoining the race in fourth, behind Hamilton, who was to make an even later decision to stop.

Now out of synch with the majority of the field, Leclerc found his tyres going through the same graining phase his rivals had experienced earlier, and, in a reversal of the situation in the dry, was helpless when Sergio Perez closed in on much older rubber.

Despite missing out on his second podium of the year, Leclerc insisted he has no regrets.

"It was a great race," he said. "On the first stint we were very, very competitive, then, unfortunately, we were a little bit out of phase with the others on the second stint, stopping later."

"It was the same a bit for everyone," he subsequently told Sky Sports, "and that's what confused us a little bit in our choice of when to pit.

"At first, in the first five, six laps of the others on the new inters, we were quicker than them on the used inters," he continued. "I was on used tyres and I heard on the radio, they were telling me the lap times of Valtteri on the new set of inters and he was not very quick at the beginning.

"I was like, 'Okay, maybe we can stay in front with those used tyres', but the thing is that for seven laps they struggled massively with graining, and then once they went through the graining they found a lot of pace, around three seconds a lap. Then we had no choice, we had to stop.

"For the last ten laps I was just trying to switch on those inters that never really came to life," he admitted. "It's a bit of a shame, because that made us lose the podium. But I don't regret anything.

"Overall it was a positive race," he insisted. "It's a shame that we lost out on a podium finish, but the performance was there which is a positive."

The youngster is adamant that the situation was the opposite to Sochi, where his team left it late in responding to the worsening conditions.