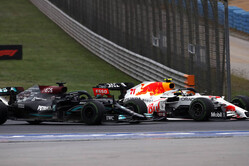 "We have no problem with tough conversations," says Mercedes boss, Toto Wolff, as Lewis Hamilton admits tyre call was wrong.

Following Sunday's feisty radio exchange, much of the media was keen to play on Lewis Hamilton's obvious frustration, using headlines like "angry" and "rage".

While the world champion's demand that; "f***, man, why did you give up that place? We shouldn't have come in", may well come across as "angry", fans - and indeed his team - have grown used to exchanges just like these, such is the Briton's commitment, determination and self-belief.

Taking to social media today in a bid to play down any media attempt to make more of the radio calls than is necessary, Hamilton wrote: "I've seen some of the press this morning which has made a bit too much of the incident in yesterday's race of when to pit. It isn't true to say I'm furious with my team.

"As a team we work hard to build the best strategy possible," he continued, "but as the race progresses you have to make split decisions there are so many factors constantly changing.

"Yesterday we took the risk to stay out hoping it would dry, it didn't. I wanted to risk it and try and go to the end, but it was my call to stay out and it didn't work. In the end we did pit and it was the safest thing to do.

"We live and we learn. We win and we lose as a team. Don't ever expect me to be all polite and calm on the radio when I'm racing, we are all very passionate and in the heat of the moment that passion can come out, as it does for all drivers.

"My heart and spirit are out there on the track, it's the fire in me that's got me this far but any angst is quickly forgotten and we talked it through, already looking ahead to the next race. Today's another day to rise and as a team. Still we rise."

"We have no problem at all with tough conversations on the radio," insisted Toto Wolff after the race. "Obviously we wouldn't speak like this to Lewis because he is driving a car at 320km an hour.

"But it's all OK. We have been in this together for eight years and are thick-skinned enough to know that the driver in the car is frustrated about the situation but he will understand afterwards."