"It will be an enormous achievement if we pull it off," says Horner 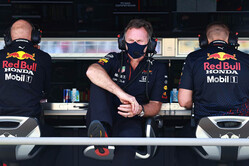 As the 2021 title battle heads towards its climax, Christian Horner says that winning it would be the team's "biggest achievement".

"It will be our biggest achievement," the Briton, who oversaw four successive title doubles with the team between 2010 and 2013, tells The Guardian. "If you look at the strength of Mercedes, and the dominance they've had, it's clear that nobody's come near them for years.

"No one has put them under this kind of pressure at this stage of the season so it will be an enormous achievement if we pull it off," he adds.

Mercedes, on the other hand...

"All (the) engine manufacturers other than Mercedes, with Ross, had underestimated the impact," admits Horner. "So, when we turned up in 2014, we were two years behind Mercedes. It's taken us pretty much to this year to get to a point where we've got a power unit capable of going toe-to-toe with them.

"It was frustrating," he admits. "It's very easy to lose motivation but there was an inner determination to get back into a winning position.

"We've retained tremendous continuity during that period," he continues. "You look around the engineering office now and many of the people still here were with us from 2010 to 2013. So we've had great continuity but we've also brought along another generation of talent, youth and capability."

Asked how he got through those tough times as Mercedes began to dominate, he replies: "You can always learn from others. Whether that's internally from seeing the way that Dietrich Mateschitz ran Red Bull or from other sports.

"I've always been an admirer of Alex Ferguson and the longevity of success that he brought," he adds, referring to the former Manchester United manager. "He just kept rebuilding his team. I had great respect and admiration for him.

"Ron Dennis, likewise," he adds. "Ron was a very different personality to me but what he achieved was phenomenal. So there are always lessons to be learnt."

Talking great team bosses, under the present circumstances it comes as no surprise that he doesn't mention Toto Wolff.

This year, in particular, the pair have enjoyed a fractious relationship, never seeming to miss an opportunity to take a swipe at one another, Horner describing the Austrian as a "control freak", while the Mercedes boss responded by calling the Briton a "windbag".

"I have no issue with Toto but we are very different people," says Horner, who recently admitted to enjoying winding the Austrian up. "I tend to be quite straight and quite direct, that's the way I've always operated. He operates in a different way but I have a lot of respect for what he's done.

"It's a competition," he says of the apparent animosity between them, "and compared to the championship years when we were competing with Ferrari and McLaren from 2010 to 2013 this has been very different. There is an awful lot more going on behind the scenes, constant campaigning of the FIA with all aspects of our car."

Minded that Red Bull has been just as vocal in voicing concerns over its rival, Horner admits: "You have to defend yourself if you come under attack as we have from the very beginning of the year, whether it was the concept of the aerodynamics with the FIA to pit stops to other aspects of the chassis, you name it."

Asked if he has ever had a private, one-on-one talk with his Austrian counterpart, he replies: "No. I've got no need to...

"He came into the sport with Mercedes in 2013 and the structure was already in place," he adds. Ross Brawn had built that team. Lewis had already been signed.

"Toto's done a tremendous job operating the team and maintaining their performance," he admits. "But of course he's never experienced anything other than winning. So it's a different type of pressure now. It's tough."

Horner's comments reflect the nature of the on-track battle between Lewis Hamilton and Max Verstappen, which has not been without its 'fractious' moments.

"I think, inevitably, there's always going to be an evolution," says Horner. "Lewis has had an amazing career and he's still in fantastic form. He's still a titan of the sport. The fact that Max is able to go toe-to-toe with him is probably something Lewis hasn't had throughout his career – certainly through the championship years.

"There's nothing with this degree of intensity," he adds. "There's obviously a lot at stake for him as he's going for a record-breaking eighth championship, Max is going for his first and he knows he's got many more years to come."

In the wake of the clashes at Silverstone, and particularly Monza, Verstappen has come in for a lot of criticism, with Damon Hill describing the Monza clash as a "calculated decision" by the youngster.

"Max was disappointed by those comments," admits Horner. "Everybody has the right to an opinion but it's disappointing because it absolutely wasn't the case."

Referring to Silverstone, he adds: "I think Lewis knew the risk that he was taking, and the stewards deemed him to be obviously more at fault.

"Unfortunately the outcome was quite skewed," he adds. "We've written off a car, lost an engine, and he managed to go on and win the race, so there was essentially no penalty for being deemed to be at fault. But you move on. OK, it didn't go our way that day but things tend to even themselves out over the course of the year.

"We just remind Max that our focus is very much on ourselves and not to get sucked into any of our competitors' comments when they're taking a pop at you," he says of the criticism. "They're doing that because, ultimately, they don't have that inner confidence in themselves. It's best to take that as a compliment.

"Whatever happens this year we are building something here," he concludes. "The whole team is loving the fact we are competitive and taking control of our own destiny with the power units in-house. We are the only team in the UK to do that and we will be the only team in Formula One, other than Ferrari, to have the engine and chassis under one roof.

"People will make the same comments about us only being an energy-drink outfit but the talent we're attracting, and the youth that we're investing in, is pushing us forward. You can feel the energy when you walk around the place. There's an excitement, a buzz and a great hunger to succeed."