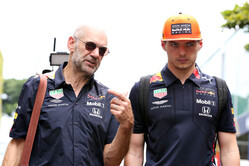 Helmut Marko has revealed that following a bike accident, Red Bull's technical guru, Adrian Newey is back in action for the championship run-in.

There's no denying that since the summer break, Red Bull's form hasn't been entirely what it was in the first half of the season, the team's struggles in Turkey being a prime example.

However, Helmut Marko has revealed that part of the reason for this has been the absence of technical guru, Adrian Newey following a bike accident during the break.

Indeed, it was the Briton's low-profile that led to speculation linking him with a shock move to Aston Martin, as Lawrence Stroll's operation targets championship success.

Talking to Sky Deutschland however, Marko has revealed that Newey, who, following a number of operations, returned to work in time for the Istanbul race, which he attended, is ready to assist the team as it battles for both titles.

"We are well-positioned, but of course Newey is a figurehead," admitted the Austrian.

"You could see that his absence impacted motivation," he continued, "and in the early stages we didn't know how serious the injury was. He had to undergo several operations.

"He is not fully fit yet, but he is ready to do his job and has immediately recognised the difficulties we had in terms of set-up," added Marko, referring to the Istanbul race.

"There will be a meeting with Verstappen in the upcoming week in Milton Keynes so that we are back on top in terms of the chassis."