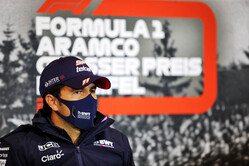 As the media speculates on whether FP1 debuts this weekend for Mick Schumacher and Callum Ilott will lead to full race seats in 2021, and even Kimi Raikkonen is claimed to be staying on with Alfa Romeo for another year, the future of Sergio Perez remains uncertain.

A few weeks back it appeared that Haas was one of the only options, along with a possible return to Alfa Romeo (Sauber), however, the news that Honda is to leave the sport has sparked talk of the Mexican heading to Red Bull.

Speaking to reporters at the Nurburgring today, Perez admitted that nothing has been signed and he is "keeping all doors open".

"At the moment there's nothing to report, nothing has been signed," he admitted. "There has been some progress, but I think it's going to take a bit more time and I think in Formula 1 until you don't have anything signed, everything is in the air so nothing really to say.

"Right now it's just a matter of keeping all the doors open and be patient as well," he added. "I am in no hurry so let's see what comes up in the next couple of weeks.

"Right now, I'm fully focused on this season with my team, I think we've made some really good progress, we're getting my season back on track and I just want to deliver weekend after weekend.

"We are close to third in the Constructors' Championship so that is the focus right now. The future is a matter of time and to be honest, I don't have a lot more to say.

"I'm trying to work around the options that are out there," he added. "I don't really have anything to report at the moment. I hope in the coming weeks things will get a bit clearer and then I will know what will happen with my future. I'm pretty relaxed about it, as I said."

The good news for the Mexican is that he will finally get to try the upgrades that have only been available to teammate Lance Stroll for the last two races.

While the team was hoping to have the upgrades available for the Mexican in time for Russia, Stroll's crash at Mugello meant Perez had to go without for the second successive race.

Looking ahead to the weekend, he said: "It's obviously going to be a tricky weekend with the weather. I think we will get some very little running to compare things and to learn from it. But the car has been very competitive in the last couple of events so I hope we can carry on."