"I haven't signed anything," insists Raikkonen 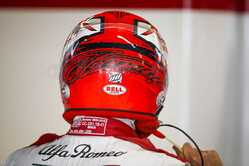 On arriving at the Nurburgring, Kimi Raikkonen was surprised to learn that he is to continue with Alfa Romeo in 2021.

Surprised, because according to the Finn, he hasn't agreed to anything, far less signed a new contract.

The famously laconic driver, who this week will become the most experienced in the sport's history, insists that no deal has been done, while taking the opportunity to hit out at the media.

"If you believe the news then it's the truth," he told reporters, "but I've never had an option in my contract so maybe that tells you that it's not true.

"I read so many things in the news over the years that I stopped reading them," he continued, "because ninety per cent is far from the truth and ten per cent is something to do with it.

"I haven't signed anything," he insisted. "I didn't sign last week or a month ago, or yesterday or today, so we will see."

Though he is 41 later this month, the Finn has been giving a good account of himself this season, and in the eyes of many deserves to continue.

Indeed, on a weekend his team gives Mick Schumacher his FP1 debut, many feel The Iceman would make the ideal mentor for the Ferrari junior.

However, asked if he still enjoys his F1, Raikkonen made it clear that it is only the racing that interests him, though the inability to regularly 'mix it' with the midfield frustrates him.

"I enjoy the racing," he said. "but obviously we have more fun when we do better.

"It's definitely not been something we want it to be, or where we're aiming," he continued, "but it was quite early on very clear that we are not where we were hoping to be, for many different reasons.

"I think we've been improving," he insisted, "and also some new parts were lately coming. So it's step by step. We're far from where we want to be, but at least we're going in the right direction and if we can get the best out of it I think we can be around 10th place all the time.

"But the racing I still enjoy, we had good battles. I wouldn't be here today if I wouldn't enjoy it, I can do other things also."