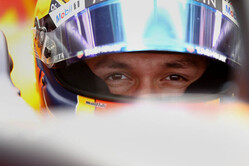 It was beyond irony when the Sky F1 commentary turned its attention to Alex Albon during the opening session at Sochi.

Regular viewers will be aware that nary a session passes without the subject of the young Thai driver being raised.

Impressed by the youngster's maiden podium at Mugello, pundit Johnny Herbert reliably informed viewers about "all the negative press" the Red Bull driver had been receiving in recent times, omitting the fact that much of it has come from his Sky colleagues.

Team boss, Christian Horner, on the other hand, has been supportive of Albon throughout, and while admitting that there are areas where the youngster needs to improve has insisted that Albon will eventually bloom. Indeed, even Red Bull's Lord High Executioner, Helmut Marko appears to be on board.

No surprise then that Horner admits that in addition to Max Verstappen, his team is hoping to keep Albon and design guru, Adrian Newey on board for 2021.

"Our intention is to retain Alex, he's doing a good job," said the Briton, "he just needs to build on the kind of performances he put in in Mugello and obviously continue that development."

"Our intention is absolutely to retain our current drivers," said Horner. "Alex is our preferred choice.

"Inevitably, you have to be aware of what the other options are out there but our absolute preference and likelihood is to retain the existing driver line-up that we currently have."

Asked about recent speculation linking Adrian Newey to Racing Point, where he he would re-partner with Sebastian Vettel who won his four titles in cars designed by the Englishman, Horner said: "He's been with us for 14 years, he's very happy within the team, he enjoys working within the environment.

"He's obviously taken more of a step back in more recent years but he's still motivated and yes, he will absolutely be with the team next year, without any doubt."