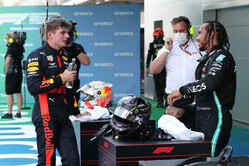 Having previously claimed that Ineos is to buy a £700m stake in Mercedes, F1 team owner turned TV pundit, Eddie Jordan suggested that Lewis Hamilton would be best served by switching to Red Bull and that Mercedes boss, Toto Wolff should quite while on top.

Understandably, the idea of Hamilton partnering him cut little ice with Verstappen.

"The only thing I'm interested in is winning the championship," he replied, when asked about Jordan's suggestion.

Jordan's suggestion comes at a time Hamilton is on the cusp of equalling Michael Schumacher's record of 91 Grand Prix wins, and the German's seven titles, while Mercedes, having won 96 of the 130 races since the hybrid formula was introduced in 2014, is cruising towards its eighth constructors' title.

On the back of successive DNFs, Verstappen is more interested in reliability, particularly that of the Honda power unit.

"I'm just very motivated to get started again, but what was more important at the time was to understand the problems so we can solve them," he said. "At the moment, we've had three retirements in nine races so it's not very lovely. We just try to work on that and try to make sure it's not happening again."

Asked if the team is on top of the issues, he said: "Yeh, I mean I think. They explained a lot to me, so hopefully it will not happen again. But at the moment, we can speculate about it. It's about time that we show it on track."

Looking ahead to this weekend's race, he said: "It's never been an amazing weekend for us in terms of competitiveness. So I don't expect any miracles.

"Of course there are a lot of long straights and a lot of 90 degree corners, which are very short corners, so you can't make a massive difference," he added.

"So probably the guys behind, they will be a lot closer compared to Mugello. We'll see throughout the weekend how competitive we are going to be, but of course the aim is going to be to try and be on the podium."