Teams reiterate call for triple-headers not to become the norm 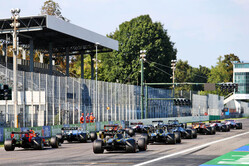 No sooner had the flag been waved at Monza, than Ross Brawn was calling on the teams to rethink F1's proposal that reverse grids be introduced. As Pitpass cheekily tweeted at the time, in light of events at Mugello the Briton, who won titles with Benetton, Ferrari and his own eponymous outfit, will likely be considering the idea that all future races be held at the Tuscan track and feature rolling starts, not to mention a sniper to shoot out a random driver's tyre around 10 laps from the end of the race.

F1 bosses have used the pandemic to introduce a number of ideas they've been wanting to introduce for some time, not least the two-day weekend at Imola.

However, while the teams accept that the hastily redrawn race schedule necessitated a number of triple-headers they insist that this must not become the norm.

"Multiple triple-headers are not sustainable," said Racing Point team boss, Otmar Szafnauer as the third round of triple-headers came to an end, a schedule that saw the teams contest nine races in eleven weeks.

"We're doing them this year," he continued, "but if I were to tell all the mechanics that this is how it's going to be, going forward, I think they would choose to do something else."

"We had a few months not doing so much in the beginning of the year," added Guenther Steiner, "but doing it going forward as a standard I don't think it's a good idea."

Last month, after the first two triple-headers, Max Verstappen warned that they must not become the norm.

"For the moment, it's fine," he said, "we had a long break before. I don't see this happening... well hopefully, next year where you keep doing triple-headers," he added. "I think that's a bit too much.

"If you can make sure it's like two weekends in a row, I think that's okay. Having a break in between is fine.

"Of course we have to accept it at the moment," he agreed. "We need to get the races in, so we just try to do the best we can."

The Dutchman's comments followed those of McLaren boss, Andreas Seidl a month earlier.

"Given the special circumstances we are in this year, it's something we simply have to get through," he told Autosport. "But at the same time, this cannot be the new standard going forward also in future seasons.

"I don't think that the biggest challenge is actually the work we have to do out here at the track," he admitted. "It's tough work, but I think the biggest issue is being away from the families and the kids and so on, for each team member.