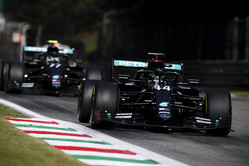 Though Red Bull won't look back on qualifying with anything like the despair of Ferrari, the fact is the Austrian team was well beaten, for other than Mercedes locking-out the front row, Carlos Sainz and Sergio Perez both qualified ahead of Max Verstappen, whose best time was 0.908s off Lewis Hamilton's best.

This, in spite of the ban on 'party modes', that Red Bull is said to have instigated.

Though Finnish, Valtteri Bottas, who was edged off pole by just 0.069s, couldn't resist some schadenfreude at the Austrian team's expense.

"The pace I had on the long runs, and we had as a team, we're looking strong," said the Finn. "With the engine regulation change for the modes, it's going to be even better for us in the race than before. Hopefully it will be good," he added with a grin.

"The car felt good, the engine felt good, like I said before, it should be even better in the race... So, I'm not sure how happy Red Bull is now with this engine change," he continued, his smile ever widening despite the face mask.

When teammate, Lewis Hamilton was asked if he missed the mode while, the Briton replied: "I don't even think we ever had a party mode. It's something someone else made up. Who knows if we even used that mode at Spa anyways?"

Other than party mode, the Mercedes pair did without seeking out tow, either from rival drivers or one another.

"I've been feeling pretty fast this weekend, so obviously I'm a bit disappointed to be second instead of first," said Bottas. "Ultimately it came to the choice, if I'm running first or second, to go first, because from our analysis, there shouldn't be much of a difference, or maybe even better to be first so you can really focus on the clean laps and not to have any messy out-laps.

"I just experienced once the final tow in the end of Q2, and actually it didn't feel too bad. That's when I got the quickest time, otherwise cutting the wind in the front. In the corners, I was fast. So it's impossible to say without seeing the data which one was better."

Meanwhile, Verstappen was keen to insist that the party mode ban did not compromise his efforts.

"Honestly I don't think we went backwards," he said. "I think this is also a bit of a weird track to really see the full benefit or differences, because Monza, everybody is in the tow, some have a better tow than others. We have to wait a bit until we go to a normal track again. Nobody wants a tow and to drive in clear air. It's too early to say anything about that.

"But I never expected it to be very different," he added. "Of course some other people were shooting some different words. It is what it is. As you can see, it didn't really shake up anything, but I also didn't expect that.

"I tried everything," he admitted, "very low, medium-low, and a little bit more downforce. I ended up doing the same lap time all of the time, so it just shows that our car is not good enough at the moment.

"Around here, we know top speed-wise, we are down on power to Mercedes especially, and that's a given, but that is not the deficit we have to them at the moment. It's not that big, the deficit in power. From our side, we just didn't have a good balance in the car, but not only that, but we're also lacking grip."