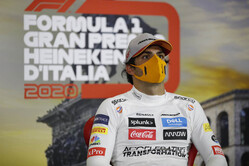 Carlos, lap of the day. Where did you pull that one out of?
Carlos Sainz: Yeah, well, obviously I've been feeling very strong since the start of qualifying, since Q1. I managed to go through with only one set, with a very strong lap. Since then it was just chipping away and trying to put, what was it, a 19.6 on the board, which I knew would have given me top five, so I was chipping away. The last lap I nearly messed up. I had a big moment in Lesmo 1 and I nearly lost it and since then on I had to drive like this, and I'm actually shaking a bit, because in Ascari and Parabolica I had to really go for it.

Tell us what it's like to pull a lap out here because you've not only got to nail the lap, you've also got to get within five seconds of someone to get that slipstream to make it happen?
CS: Yeah, I felt I was like nailing Q1 and Q2 and in Q3 in run one I didn't quite nail it and I was waiting for Q3 run two and the lap didn't start very well and I was already needing some very strong final corners and I really went for it and I risked a lot and it paid off. As you can see, after the dive I did into Ascari, I was a bit like 'wow, that was way too late'.

How was you race pace yesterday?
CS: It's not as good as P3 I think but we will try to hang on there. We have the Renault's this weekend, and I thought they were going to be quicker than us, but this lap helped.

Valtteri, obviously a very good lap in Q2, it looked like you had the better of Lewis but he just had half a tenth that you couldn't quite get in that last session?
Valtteri Bottas: It was really close, as I was suspecting. I was running first this weekend, so not sure with the tow. I didn't obviously have any, except in Q2 at the end I had and it kind of felt I gained a bit of a benefit from that. At the end I was on my own and it's not too bad a place to be but you don't get any gains on the straight line.

Obviously it's the first time you are starting on the front row here but did you feel confident leaving yesterday about the high fuel runs?
VB: Yeah. It seemed good. I think my long-run place compared to Lewis was good so it's going to be a good race tomorrow, so all to play for.

Lewis, another pole position. It looked steady. It looked everything it needed to be. How was it for you?
Lewis Hamilton: Yeah, it was not too bad. Fantastic performance from the team today, just in terms of timing and when they put us out on track. It wasn't the easiest, you saw how close it was between us all and it really demanded a clean lap and I think I got that on both. I'm generally very happy with the laps I did. Valtteri was very, very close, pushing. I made some big changes going into qualifying so I was a little bit nervous going in that it was the right thing to do, but it worked just fine.

Obviously it was a tough session in FP3 but you got the job done. How difficult is it on low downforce to wrestle a car around here with the slow-speed chicanes and equally when you get to Ascari, Parabolica?
LH: In years I've done here, I've obviously been here a lot, I've had times when we have had less downforce and less grip. I would say today, with the temperatures, we have quite a lot of grip out there. The speed we are going through the Lesmos is pretty awesome. You are moving around when you get to the low-speed sections, so Turns 1, 2, and 4,5 so it's definitely a little bit tricky there. But there rest of you're kind of trying to gauge just how much you try to attack, keep your minimum speed up, and make sure you get the exit because you have these long straights, so it's trying to find the balance, which is not easy.

Lewis, that looked like a very tidy, clean session for you. Are you surprised by the gap to the opposition, you're eight tenths of a second faster than Carlos Sainz in third place?
LH: I don't come into the weekends with the expectation of how much of a gap we are going to have. But of course... I don't really understand it. We did say last week when they brought in this rule to slow us down that it wasn't going to make a difference but we have a great, great car and we are better in other areas. Just an incredible performance this weekend. I think this is definitely the best we've ever been here. We've really got the car in a sweet spot this weekend. So, just a huge thank you to all the guys back at the factory for the simulations and working on getting parts to these races and continuously stepping forwards. It's such a hard thing to do and I think people take it for granted because we do it weekend in, weekend out. It was very, very close. He's been very, very quick so far this weekend. I'm really happy with the laps. They're not really anything on the last one I did but nonetheless I'm grateful for it.

Was there a change of tactics for this Q3 session in particular, after what happened last year when everyone tripped over each other?
LH: Not really. I think we learned last year in terms of going out at the end is not the best for us. I think the strategy team did a really good job in terms of the timing. It's something we discussed yesterday and today and ultimately I think it was bang on. Valtteri chose to go first this weekend. It's very, very close between having clear air and having a tow and I can't really tell you which one is best. I think some people will say getting a tow is best, but you lose out in the middle of the last sector. Ultimately, I'm really, really happy and grateful for today.

Valtteri, coming on to you. Clear air or being in a tow, seven-hundredths the gap to Lewis. Where do you think you lost it?
VB: Yeah, pretty close. Close gap, and I was expecting it to be close. I've been feeling pretty fast this weekend, so obviously a bit disappointed to be second instead of first but ultimately it came to the choice of running first or second. I took the first because, from our analysis, there shouldn't be much of a difference, or maybe even better to be first, so you can really focus on the clean laps, and not to have any messy out-laps but I just experienced once in qualifying a tow, end of Q2 and it didn't feel too bad and that's when I had the quickest time so, otherwise just cutting the wind at the front. In the corners I was fast. It's impossible to say without seeing the data, which one's better.

How's your car in race trim? It's a long old run down to the first corner here as well, isn't it?
VB: It is. As soon as you're starting here in the first or second row, you always have a chance. There will be opportunities and I think the pace I had in the long runs, that we had as a team, is looking strong. Also with engine regulation change, for the modes, it's going to be even better for us in the race than before. So hopefully that will be good.

Carlos, inside the top three for the second time this year. Just how satisfying is it to be here, particularly after the disappointment of Spa last week when you didn't even start the race.
CS: Yeah, very happy to fight back after obviously a very disappointing Spa, and to fight back with a P3 in qualifying... definitely didn't expect to be so high up. We normally expect the Red Bulls or the Renaults at this track to be ahead of us but honestly since the start of Q1 I felt like I had a chance to put it in the top three today and by nailing good laps since the beginning of Q1, saving myself again another two sets for Q3, that gave me the opportunity to really risk it on the last set at the end of Q3 and it paid dividends.

(Alex Kalinauckas - Autosport) Question to the two Mercedes drivers please. Regarding obviously the Technical Directive that came in regarding engine modes this weekend, did you miss the party mode or was the sensation largely the same at the end of qualifying in the mode that you did run today?
LH: I don't every think we had a party mode. That was something someone else made up.

Did the car feel any different, compared to last weekend at Spa?
LH: Who knows if we even used that mode in Spa anyways?

Valtteri, anything to add on this?
VB: Car felt good. Engine felt good and, like I said before, it should be even better in the race. So, not sure how happy Red Bull is now with this engine change.