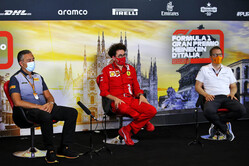 Q: Let's start, if we may, by talking about Williams. Can we get each of your thoughts on yesterday's news that the Williams family is leaving Formula 1 after this weekend. Andreas, you worked with Frank in the 2000s, perhaps we could start with you please.
Andreas Seidl: Yeah, first of all, obviously sad news to know that the Williams family is not involved any more in Formula 1 in the future. At the same time also positive news that, first of all, the Williams name stays in Formula 1 as far as I understand. For the future in front of us for Formula 1 there is actually interest of investors to join. And last but not least, I think it is very important for the employees as well in the Williams team that they know they have a good future. And then, regarding my personal experience with Williams. It was obviously great for me as a young, and keen engine engineer to learn my way in motorsport in a Williams garage. I always admired this unbelievable commitment and passion all these guys had at Williams in the garage, which was a great education for me. And what was simply inspiring for me was how Frank, as a team principal at this time, was also interacting on the human side with his people. I still remember when he was coming in the garage every morning, saying hello to everyone, calling out the name also, and exactly the same again each evening. That's something that, yeah, I still admire and was very inspirational for me.

Mattia, you've had a constant rivalry with Williams throughout your tenure at Ferrari.
Mattia Binotto: If I think of Williams I cannot forget all the challenges we have as Scuderia Ferrari. Our history, Williams is part of the history, always a very fair battle, a very fair challenge. I think that Williams has contributed to the F1 of today. Williams certainly is an important name, an important family for our sport so somehow it's maybe sad but it's also important and great to know that the Williams name will remain in F1 for the future because I think, as I said, it's really part of the history and as Ferrari we can only remember the great challenge we had with them.

Q: And Mario?
Mario Isola: I agree with them. I remember Maldonado's victory in 2012. It was our second year in Formula 1. Obviously I have a lot of fond memories as a Formula 1 fan but my direct involvement with them was since 2011. It's great that the new owner wants to keep the same name. I hope they can keep the same passion. I read what Claire said yesterday to guarantee a bright future of the team. It is hopefully the right decision and I wish them all the best because they deserve a better future than the last couple of years.

Q: Andreas, Carlos said yesterday that he's concerned about reliability, believing that he's lost up to 30 points this year and that he's had only two clean races. Would you agree with that assessment?
AS: First of all, I fully understand that he's disappointed that he lost out on many points this year so far but we share this disappointment because we lost the points as well for the team. And in the end it's always important to simply stay to the facts and look into the details of what actually happened. I think in terms of reliability, the issue was actually only the last race where he couldn't even start the race and lost out on many points after an engine issue. But then we had other topics as well. We had the tyre failure in Silverstone where he lost a lot of points. But also on the team side, not everything went to plan. We lost out on some points with issues we had at the pitstops early in the season and that's obviously something to look into. And, as always, as I said, it's important to stick to the facts, analyse in detail what happened and make sure. And it doesn't matter who was at fault to simply try to do better and avoid it. I'm sure that also with the way Carlos is approaching the situation within the team we will still have a lot of good results in front of us together with him until the end of the season.

Q: Mattia, coming to you. Spa was probably the team's most difficult race of the season so far. Did the post-race debrief reveal anything that will help you this weekend here at Monza?
MB: Sunday we had a long debriefing back from Spa. I think it was only a very few days to analyse because in the meantime we had to prepare Monza, to come here and be somehow ready for the race weekend. I think Spa is a difficult circuit for our car package today. It's a difficult circuit because of power, how much it is sensitive to power and aero efficiency. So, I think it did not come as a surprise, our bad performance in Spa, knowing where our weaknesses are today. We could have done better, I believe so, I think that we started in a bad position on Friday. I think we didn't optimise our entire full package there. And when you start behind on the grid the race is certainly a lot more difficult. So, we could have done a better job all through the weekend - but certainly it would have been anyway a difficult race for us around Spa. If I look at the entire season, hopefully the worst one.

Q: Coming to you Mario, it's been announced recently that you'll host a 30-minute development test at the Portuguese Grand Prix. What are the plans for that?
MI: Obviously we have collected a lot of information from Silverstone and Spa and we decided to postpone the tests that were planned at the second race in Silverstone and at Barcelona, to redesign some prototypes. The idea to slightly revise the construction for next year. As you said, it's only 30 minutes. We will supply different compounds to different teams in order to try to collect as much information as we can to define the tyre for next year. So, this is the plan for Portimao. Obviously it's a new track. We don't have a lot of data from Portimao but from now onwards we have a lot of new tracks so we had to decide on which track we wanted to test and Portimao is a high severity circuit where we probably find some good weather and that's why we decided to nominate Portimao for our test.

Q: (Christian Menath - motorsport-magazin.com) Question for Mattia. Ferrari is struggling a lot at the moment but Sebastian seems to have even more problems. He had a new chassis in Spain but that didn't' help that much. Do you have an explanation why he's more struggling than Charles - or is it just a normal gap between the two drivers.
MB: I think at first we should say that Charles is very fast at the moment and when you are comparing yourself to such a fast driver is never easy, even if you are a four-time World Champion. I think that Seb is struggling a bit with braking stability. He's not too confident with the car and certainly it's down to us to help him. We know that he can be very fast, we know that he can be as fast as Charles but at the moment, if we look back at the last races, somehow sometimes yes, he drove well and he could drive as fast as he could - but sometimes it was not the case. There is nothing really specific. It's really him to find the right confidence with the car all through the weekend, to have a great quali and possibly to start as much ahead as he can.

Q: (Dieter Rencken - Racing Lines) Mattia, could you confirm whether or not you confirmed your appeal against the Racing Point reprimand from the Spa grand prix, and also your reasons for continuing with the appeal over the original verdict please?
MB: So yes, we confirmed our protest, so have appealed the decision of the stewards at the past races. The reason is that we are fully convinced that what Racing Point did this season is not right. We believe that's against the principles of our sport and we believe that cannot happen in the future. In that respect we are asking for and seeking clarity with the FIA. If, let me say, regulations will be put in place, a Technical Directive for the future in 2021 where we are pretty sure it will not be possible to copy, eventually we are ready to withdraw our appeal.

Q: (David Tremayne - Grand Prix +) This question please to Mattia and Andreas. Toto Wolff recently suggested a rival had been spotted trying to scan Mercedes whole car. Can I ask each of you what your feelings are about the morality of that - and how it can be stamped out.
AS: Obviously I can't comment on that because I haven't seen it and I just want to reiterate what we said also two weeks ago. For us, we are happy with the outcome of all these discussions we had since Racing Point has put this car on the track the first time in Barcelona. There's a commitment from all stakeholders in Formula 1 that they don't want to see something like this happening again in the future. That was important for us, for our existence as a team and also for our competitiveness also in the future because we don't have any of these, let's say, co-operations in place. Therefore, nothing to add really.

Mattia?
MB: Not really much to say. I'm not too aware of the facts. I think that looking at competitors, trying to understand what they do, trying to study their car has been part of F1 history and I do not see anything bad in that. I think that to copy an entire design, that's a different against the spirit because that's IP. Me, myself, had I been Mercedes, I would have protested someone copying myself. It's not within the spirit. So I think that, I don't know, taking pictures has always been done and I don't see anything wrong in it, in the fact itself.