Montezemolo hits out at Ferrari 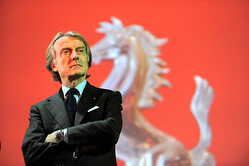 As Ferrari looks forward to one of its hardest weekends (fortnight?) on home turf, Luca di Montezemolo, who was with the team during two of its golden eras – that of Niki Lauda then Michael Schumacher - has hit out at the Maranello outfit.

The Italian, who first brought Jean Todt on board, and in turn Ross Brawn, Rory Byrne and Michael Schumacher, believes the team has acted badly in its dealings with Sebastian Vettel.

"He has never caused any problems and always works from the team point of view," he told RTL. "And he has won many races that other drivers would not have won.

"I am therefore not happy with the way Vettel has been treated," he added, referring to the German's claim that he was dumped without any consultation with the team. "The timing was not right and the way it was done was certainly not right."

When Schumacher joined the team in 1996, the two-time world champion joining at a time the Maranello outfit hadn't won a drivers' title since 1979, it took five seasons for the German to claim the first of five titles with the Scuderia.

Montezemolo insists that like Schumacher before him, Vettel needed the support of the team and didn't get it.

"Those drivers need an environment where they feel at home and supported," he said. "That was the case with Michael when Jean Todt was at the helm and I did it with Niki Lauda."

The Italian believes that following his departure, the team was wrong to let Stefano Domenicali go, and subsequently James Allison, who went to Mercedes.

"After that, the people had neither experience nor competence for Formula One," he said.

In terms of the hybrid formula, he admits: "We underestimated the complexity of the new power unit project. Compared to Germany, there was no hybrid culture here in Italy."