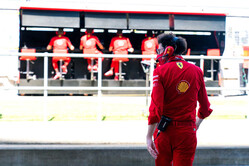 Like much of the media, when referring to Ferrari we often refer to it as part of the 'big three', along with Mercedes and Red Bull.

However, as recently as 2014 the Maranello outfit slumped to fourth in the standings, while in 1980 - the year after Jody Scheckter secured the title for the Scuderia - the team finished tenth.

While the 'Schumacher era', that period of domination so similar to today's, as Mercedes and Lewis Hamilton clean up, it should not be forgotten that the last drivers' title was in 2007 with Kimi Raikkonen, while the most recent Constructors' Championship came a year later.

While some are blaming Mattia Binotto for the team's current troubles, the fact is that the Italian, who has Ferrari in his DNA, should never have been appointed to the role. And now, as the Italian media bays for blood Ferrari is likely to compound its dilemma by firing a brilliant engineer.

Let's not forget that Binotto was basically a knee-jerk reaction as the team booted out Maurizio Arrivabene, the ex-Marlboro man who had the looks and demeanour of a character straight out of Gomorrah. And before that we had the ever smiling, yet totally anonymous and woefully out of his depth Marco Mattiacci.

Much like Gomorrah, Maranello has witnessed its fair share of bloodbaths over the years, indeed, Mattiacci's inexplicable appointment followed the dumping of Stefano Domenicali, who was himself trying to pull the team back together after the all-powerful triumvirate of Todt, Brawn and Byrne had moved on.

Binotto is an engineer, and consequently is totally out of his depth as a team principal, especially when one is talking of the political hot bed that is Ferrari.

Other than the team's woeful drop-off in performance, due in no small part to last year's engine shenanigans, there appears to be a total breakdown in the relationship with Sebastian Vettel. Indeed the German's very firing and the way it was subsequently handled points to the sort of management that would even embarrass David Brent.

Now, Mercedes boss, Toto Wolff has poured some gasoline on the fire, as he questions the decisions made by "certain members" of the Italian team.

"I very much feel with all the tifosi and employees of Ferrari for this lack of performance," he added, the Austrian insisting that the Maranello team is "an iconic brand" that "should be racing at the very front".

Stating that Ferrari should "question the priorities that have been set in recent times, and where the lack of performance comes from", he lamented that "nobody, from the fans and the Ferrari people, deserves such a result".

Asked to explain what he meant by "priorities", Wolff explained: "Actually it's wrong to say Ferrari's priorities, because that drags Ferrari and everybody at Ferrari into this...

"It's maybe the decisions that have been made within the team, from certain members of the team," he added.

Of course, while the Austrian may indeed believe that F1 needs a strong Ferrari, in light of his recent comments about his own future at Mercedes, could Toto be throwing his cap in the ring at Maranello?

Think about that... Toto at Ferrari.