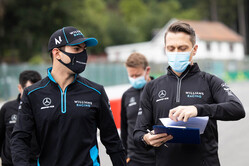 Both Williams drivers have given the thumbs-up to last week's purchase of the legendary British outfit by American investment company Dorilton Capital.

While it will be some time before the benefits of the deal are witnessed on track (or not), there is speculation that in the short term there will be management changes in the coming weeks.

Ahead of this weekend's Belgian Grand Prix, the Grove outfit's 751st appearance, George Russell and Nicholas Latifi gave their full support to the deal.

"Obviously its very positive news for Williams as a whole," said Russell, "and everybody who works for the team and for both of us as drivers.

"It was a slightly nervy time previously," he admitted, "and I'm very pleased to see that the company and the team is stable moving forward and has got a great company behind to help push Williams back to where they belong, which is definitely higher up the grid.

"The Williams family have been a huge part of Formula 1," he continued. "I think the most important thing with this change of ownership is the name and that side of things will be continuing, which I think is very important.

"Obviously the Williams family would not have sold to somebody who they didn't believe would be beneficial for the team moving forward," he insisted. "The culture will not be changing from a historic side, and keeping the name of the team is very important as well for us drivers and the people back at base."

"It's a very positive step for Williams," said Latifi, whose billionaire father has brought a number of sponsors on board and, having provided funding for the team in the form of a loan, was considered a potential buyer.

"It's a family-run team, and I'm sure that side of things will not change, which is part of what makes Williams, Williams," he added.

"Since I've been with the team, I've really been enjoying that side of things, the team environment, and the culture that's been cultivated here over so many years. So I would hope that that would stay."

With teams using their 2020 contenders again next year, it is likely that it will be 2022 before any genuine signs of progress are seen in terms of results, but Russell remains confident.

"Formula 1 is an incredibly complex sport and historically things don't change drastically very, very quickly," he said. "I think 2022 is a great new opportunity for all the teams to start from a new basis.

"I don't know exactly what the plans are moving forward, but definitely 2022 I'm sure is a big part of Dorilton's goal to focus on."

Whatever Dorilton's plans might be, unless Williams undergoes a seismic change and returns to its former race winning ways, Russell will be hoping beyond hope that he has found an alternative berth by then.