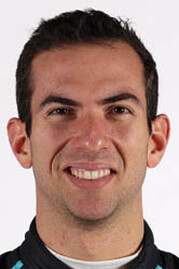 Nicholas was a comparatively late starter, entering his first kart event in his early teens (14).

Enjoying moderate success in his Canadian homeland, after karting he moved up to the Continental Tire Sports Car Challenge in 2012 driving a Ford Mustang.

2013 saw him switch to single-seaters, the youngster finishing 9th overall in the Toyota Racing Series in New Zealand, alongside teammate Mitch Evans.

Aware that he needed to be in Europe, he followed in the footsteps of so many before him, opting to contest Italian F3 championship with BVM. Taking his maiden victory at Vallelunga he subsequently finished seventh in the final standings.

Rather than remain in F3, once again he opted to switch series, this time heading to Formula Renault 3.5, racing for Tech 1 Racing in 2014 and Arden International in 2015.

2014 also saw Nicholas make an appearance in the Porsche Carrera Cup Great Britain, where, driving for Redline Racing at Rockingham Motor Speedway, he scored a fourth-place finish in the second of two rounds there.

Other than his Formula Renault 3.5 commitments in 2015, Nicholas contested a number of rounds of the GP2 Series with MP Motorsport.

The following season he remained in GP2 but switched to DAMS, ending the year a lowly 16th overall.

He remained in GP2 - albeit now designated F2 - in 2017, finishing the season fifth overall despite only taking one win.

In early 2016 he was named as Renault's test driver but there were no outings for the Canadian youngster.

Indeed, other than a few demonstration events, Nicholas didn't drive an F1 car in anger until the Pirelli tyre test at Barcelona in May 2017. He subsequently drove the RS17 in the post-Hungary test.

In early January 2018, Nicholas was named as Force India's test driver, though in all honesty it is hard to see what attracted the Silverstone-based outfit, or indeed Renault before them.

In a curious move, just weeks before Nicholas made his FP1 debut for Force India, his father bought a £203.8m stake in McLaren Group.

Naturally this prompted talk that in time Nicholas might be named as part of the Woking outfit's future plans, an idea subsequently given added strength when fellow Canadian billionaire Lawrence Stroll led the consortium that bought Force India.

However, as the FP1 outings continued, and Nicholas headed to ninth in the F2 championship, courtesy of a win in Belgium and two further podiums, there was no mention of the youngster and McLaren in the same breath.

However, in early December, Williams, which like McLaren was currently going through its own difficult patch, announced Nicholas as its - reserve driver for 2019.

According to the team, the youngster would "support the team at race weekends and the factory to help maximise car performance" and would "also be involved in the team’s media and sponsorship programme".

With Williams, like McLaren, making no secret of its desire to see F1's owners introduce a budget cap and spread out the prize money more evenly, one had to wonder whether Nicholas' recruitment had more to do with his father's wallet than his own talent. After all, the team had just lost the Stroll millions.

Remaining with DAMS for a fourth season, Nicholas finished runner-up to Nyck de Vries in F2, winning four races and making four other visits to the podium.

In addition to the in-season tests, and that post-Abu Dhabi, he drove the FP1 sessions for Williams in Canada, France, Belgium, Mexico, Austin and Brazil.

In late November he was announced as George Russell's teammate for 2020 at Williams, Claire Williams stating that the team had "been immensely impressed at what he has achieved this year in F2, along with his commitment to the team, and the work that he has put in behind the scenes.

"Nicholas has become an established and well-respected member of Williams," she added, "and we look forward to him stepping up into this new role, as we look to fight our way back to the midfield.”

While Nicholas' signing raised eyebrows, one only has to look at his father, Michael, who owns a £200m slice of McLaren, to see what might have influenced the team's decision, for in the days following the youngster's confirmation the Grove outfit announced several new (Canadian) sponsors.

That said, though the team also announced a number of interesting changes to its technical team, the signing of Roy Nissany as "official test driver" does little to dispel the fear that Williams is a team in freefall, a team in line for extinction unless someone gets a firm grip.