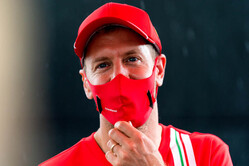 While his lowly position on today's timesheets is more about the car (and engine) than the man at the wheel, there is no denying that, for whatever reason, Sebastian Vettel's performances have been lacking this year.

Though the SF1000 is not in the same class as the Mercedes or Red Bull or even the Racing Point, teammate Charles Leclerc has been able to string some decent results together, while the four-time world champion is to be found in the nether regions of the top ten.

Be it the car or internal politics - always a strong possibility at Maranello - the Vettel of 2020 is but a pale shadow of the title winning driver of the early 2010s.

Asked at today's press conference if the reason for Vettel's loss of form is due to the fact that he belongs to a different era, the early 2010s, the days of blown diffusers, Christian Horner leaped to the German's defence.

"Not really," said the Briton. "I mean, Sebastian drove with refuelling, no refuelling, blown diffusers, no diffusers, f-ducts, no f-ducts, DRS, no DRS... he drove a whole variance of different cars over the years.

"Obviously what he achieved in the period during those years with Red Bull was quite special," he continued. "I think he's the third most successful driver in the history of the sport.

"He has achieved some incredible things, many records which will stand for some time," he added. "So, for whatever reason, things aren't working for him at the moment.

"I think any driver has to be happy in their environment, and you can see that he's carrying quite a lot of weight on his shoulders. And that has a bearing on any on any sportsman, on any athlete.

"So I don't think we're seeing the real Sebastian Vettel at the moment. He's obviously having a difficult time with the product that he has at the moment. But you can't take away anything that he's achieved obviously in his career to date."