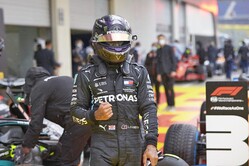 Ahead of last week's Spanish Grand Prix, the teams received a letter from the FIA making clear that it was about to send out a technical directive in which engine modes would be banned from the Belgian Grand Prix.

While the ban will impact Mercedes' infamous 'party mode' in qualifying it will also affect drivers performances in races whether in terms of easing off in terms of engine management or a boost when battling rivals.

Race director, Michael Masi is confident the FIA can police the rule despite the best efforts of the four engine manufacturers.

"We're very confident of that, otherwise we wouldn't have gone down the road that we have," he said. "I know that the technical team in particular has done a huge amount of work on this, and has also consulted with the four power unit manufacturers to get their input into this.

"As the late Charlie Whiting used to say, we have a technical team of ten, you add a thousand people at each of the various PU manufacturers, so...

"But no, we are confident," he insisted, "otherwise we certainly wouldn't be going down that road pursuing it."

Asked if the ban will be in place for Spa, he replied: "It's intended that the technical directive regarding the engine modes will be issued prior to the Spa event."

"I think the primary goal of the FIA was to implement the rule to better understand and better analyse what is going on with the engines," said Toto Wolff in Barcelona at the weekend when asked about the ban. "It's a very complex method between the combustion engine and all the energy recovery system and in having one mode it becomes more easy for the FIA to really see if everything is in compliance."

Asked if he feels the move is to handicap his team, the Austrian said: "It has always been the case in Formula 1 that pulling back the leaders, or what supposedly are the leaders, is something that is good for the sport.

"We see it very much as a challenge," he insisted. "We have a good qualifying mode and we are able to give it a little bit more power in that last session. But if that is not possible anymore because everything needs to be smoothed out over the race then it's not a deficit for us but on the contrary, we think we can translate it into more performance in the race. That is something that is a great challenge for us that will take on once the rule is implemented."

"It's not the last, it's even not the first technical directive on power units, showing how complex and difficult is that set of regulations," added Mattia Binotto. "There have been many TDs which have been issued in the last months on the power unit and I think that all of them have eventually affected all power unit manufacturers.

"I think that the next one as well will simply affect all the power unit manufacturers," he continued. "Will it affect one more than the others, I simply can only understand by the time we get the technical directive. We need to see the real, true content of it.

"Obviously, if you are the best car on track, the status quo would obviously the best solution to move forward. But at the end it's not a technical directive that will be against one of the other manufacturers. It is simply again that the regulations are so complex that clarifications are required. That's it."