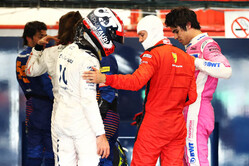 There was no mistaking his exasperation.

When asked if he could make the soft tyres fitted on lap 29 last to end of the race, the German replied: "Ah, for f*** sake... I asked you this before!"

If proof were needed that the relationship between the German and his team is breaking apart day by day, surely this was it.

"Sometimes questioning doesn't mean that it's a misunderstanding," said the Italian, when asked about the testy exchange. "I think questioning ourselves by communicating is important finally to get the right choice.

"I felt that the last few races we made the right choice," he continued, "sometimes lucky as Seb said, but at least we came to the choice because we are communicating.

"To be open on the radio, when you're in the midfield, sometimes it's difficult but just making sure at least just by questioning, again, we make the proper decision," he added.

"At least from our side, we've not changed a different type of tone or what else, so I'm quite surprised," he insisted. "It's not the case."

The German remained on his softs until the end of the race, finishing seventh he was subsequently voted 'man of the race' on the official F1 website, one of those on the list of sites not blocked by gamstop.