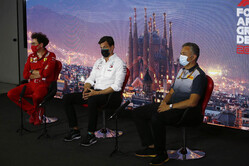 (Christian Menath - Motorsport-magazin.com) Two questions and the first is for Toto. Toto, with the letter you received you received from the FIA a few days ago do you have the feeling that the FIA wants you to stop winning. And also, especially on the engine side, with the engine modes, do you think that there is the chance that the gap of one engine manufacturer will be even bigger because you can afford to run higher modes the whole race. Probably also for Mattia, because he is an engine guy?
Toto Wolff: I think the primary goal of the FIA was to implement the rule to better understand and better analyse what is going on with the engines. It's a very complex method between the combustion engine and all the energy recovery system and I having one mode it becomes more easy for the FIA to really see if everything is in compliance. And then on the second point: it has always been the case in Formula 1 that pulling back the leaders, or what supposedly are the leaders, is something that is good for the sport. We see it very much as a challenge. We have a good quali mode and we are able to give it a little bit more power in that last session. But if that is not possible anymore because everything needs to be smoothed out over the race then it's not a deficit for us but on the contrary, we think we can translate it into more performance in the race. That is something that is a great challenge for us that will take on once the rule is implemented.

Mattia?
Mattia Binotto: I think what Toto said somehow is reflecting our thoughts as well. It's not the last certainly, it's even not the first technical directive on power units, showing how complex and difficult is that set of regulations. There have been many TDs which have been issued in the last months on the power unit and I think that all of them have eventually affected all power unit manufacturers. I'm think that the next one as well will simply affect all the power unit manufacturers. Will it affect one more than the others, I simply can only understand by the time we get the technical directive. We need to see the real, true content of it. Obviously, if you are the best car on track, the status quo would obviously the best solution to move forward. But at the end it's not a technical directive that will be against one of the other manufacturers. It is simply again that the regulations are so complex that clarifications are required. That's it.

(Julien Billotte - Auto Hebdo) Toto, you have been very successful with Mercedes, which deserved to be praised really, but at the same time you have shares in Aston Martin and Williams, you've tried to broker peace between your Mercedes customer team Racing Point and its rivals. We've seen two Mercedes-powered, present and future, back down from the deal. You are unhappy with the Concorde Agreement and you are also managing driver in some way with the Mercedes young drivers programme. Do you understand that some people might have some concerns that you arte involved on too many fronts at the moment?
TW: I completely understand that if you have been successful over a few years and me as an entrepreneur, which I have always been, having interests in certain indirect relationships with players in the sport - this is annoying. If I were on the other side I would also pick on these things. There is one essential point with me: when I joined Mercedes, I decided, and this was an intense discussion with Mercedes, to do everything in the interest of the sport. So, to clarify: I sold the Williams shares but I got them back because they were held in escrow and the last payment defaulted. It's not something that I wanted and I made it clear with Mercedes that my main priority with those shares is to sell them. So the process that has been started by Claire and the team is something that I really appreciate because it allows me to sell those shares. That's number one. Number two: The Aston Martin investment is tiny. I've bought a few shares in a car company that has no direct shareholding with an F1 team but is simply doing the branding on the Red Bull car this year and on the Racing Point next year. I see it as a good investment - I like the products, the new management team is fantastic. And I have no board seat, which was agreed with Daimler, and no other involvement. I'm not a consultant, I'm not an executive and I'm just watching from the sideline what happens. And driver management. I've refrained from direct driver management. It's all under the roof of MGP, of the Mercedes Formula 1 team. We have tried, like any other big team, to really look at the talent that is coming up from karting onwards, and like Ferrari, that has expanded its activities in the junior programme, and has some very promising young drivers coming up, we have done that a few years ago. Red Bull has done it. There is no conflict of interest. But I understand that it pisses some people off and sometimes the perception is something that is important to recognise and I do that.

Mattia, what is your opinion on Toto being involved in so many different areas?
MB: I think it's not the first time that in our motor sport or generically speaking sport, you have people who have interest and values in associate companies ore whatever. So, difficult for me to judge but for me what is more important is that there is a set of regulations that makes sure there are no conflicts of interest and if there are any it is certainly not up to me to judge but someone has to do it and I'm pretty sure that whoever has to do it is simply doing it and if so far there are no conflicts of interest that have been raised then eventually there are not.

(Ronald Vording - motorsport.com via email) Mario, given the exciting race at Silverstone last weekend, would you consider softer tyre compounds in the future and perhaps be less conservative wirth the tyre choices?
Mario Isola: That has been discussed many times, also in the past. On the one side we have people asking for more aggressive choices because we push the teams to have two stops and probably more action, it's more difficult to manage the tyres. And on the other side, we have the drivers who are not happy to manage the tyres, they want to push on them. It's a difficult balance and we need to find a compromise. Last weekend it was a very exciting race but it was a bit too much dictated by tyre management. It's not easy to find the right compromise but we are looking for that. First of all it has to be agreed with everybody - with the FIA, FOM, teams and drivers - in order to have a unique direction, to understand what is the right way to develop the tyres also for the future.

Toto, would you welcome softer tyre compounds going forwards?
TW: I think it's the same for everybody. We have seen there is some variation in performance between teams that do very well in hot conditions and softer tyres and we have been a team that has been particularly good when it is colder on any kind of compound. And we suffered last week in Silverstone because I think we didn't have the car in the right place. You could have seen with Charles in the second stint, and also with Max, that their cars just worked the tyres much better than we did. Pirelli is going to choose the tyres for the best show and we completely understand that and it's up to us to manage the tyres in the best possible way.

MB: I don't think that simply softer tyres will dictate a better show. I think at the end it's a matter of situations, weather conditions, the type of circuit, the type of situations, aero downforce, so at the end, I think again, it should be down to Pirelli to make sure they are doing the proper choice, the proper choice for what is a specific race, knowing as well that there are high degradation which can be bad for the wear and for the safety of the tyres themselves. So I think there are plenty of conditions that need to be taken into account and only Pirelli can do that. As for the fans of the teams, the fans of the sport, taking into account safety, the spectacle and again, as I said, and as Mario said, if you've got a race where it's tyre management which is the driver of the result is happening as well.

(Luke Smith - Autosport) Toto, the ruling from the FIA about the Racing Point transfer made clear that Mercedes - the January 6 transfer apart - hadn't given Racing Point any new information therefore it wasn't a significant breach of the regulations. This appeared to have been an area that some of your rivals have homed in on as being a possible sticking point, a couple of your rivals have questioned Mercedes involvement in this whole case. Is it frustrating that even when you have an FIA ruling that makes clear that Mercedes wasn't in breach of the regulations you still have these sort of questions being asked by your rivals? Or is that just what comes with being the leader, having a target on your back?
TW: I don't think it's related to being a leader. I think Formula 1 has always been the competition on the track and also the competition off the track and as hard as we race each other on Sunday or on Saturday, we also fight the political game that is important and has always been the case. I think the Racing Point case is an opportunity for your direct competitors to maybe push us hard and that has always been the case. We have a clear position on the Racing Point situation and in that respect it doesn't really bother us and it shouldn't bother us because the FIA have made that clarification and the little nudging that is happening around that is something that is acceptable.