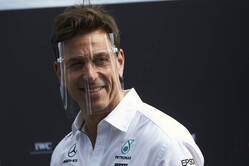 What a difference a week makes.

Seven days ago, as 'duct-gate' erupted, further signs of a summer of discontent emerged when Toto Wolff said he was not ready to sign the new Concorde Agreement.

At the time the Austrian said he was "not ready" to sign and instead though it best that the current agreement be extended.

While Wolff is understood to be in agreement with many of the proposals in the new agreement, the main sticking point was money.

"We made it very clear that we are happy with a more equitable split of the prize fund, the way success is rewarded and possible for everybody we agreed to," he said. "We are, I would say, the biggest victim in terms of prize fund loss in all of that.

"Ferrari has maintained an advantageous position, for Red Bull it balances out with Toro Rosso," he continued, "so it's us that are hurt the most.

"I feel that Mercedes has contributed to the sport over the last years," he added. "We have, apart from being competitive on track, we have the driver that has clearly the most global appeal and we feel that whilst being in those negotiations we weren't treated in the way we should have been.

"Therefore there are a bunch of open topics for us that are legal, commercial and sporting and in our point of view I don't feel ready to sign a Concorde Agreement."

Asked how far away Mercedes was from agreeing to sign up, he said: "That depends on the other side. If you are willing to sit at a table, address the critical topics, discuss them, come to a compromise outcome, then I think it can go pretty fast. But I haven't seen that approach."

Clearly those seven days have seen a change of heart.

With the original deadline extended until the end of the month, Wolff told reporters at Barcelona today that he is now ready to sign.

"I have changed my opinion in Silverstone," he said. "I've been pretty vocal after the meetings that we had within the team to say this is what we need and these are the clarifications we needed in order to move forward.

"I don't think that the teams will ever be united," he admitted, a masterpiece of understatement. "Everybody tries to achieve some little deals outside, there is a blame culture in the media, so we have decided to move forward with Liberty.

"I've had some very constructive discussions with Chase over the last weekend and most of the clarifications that we wanted to achieve have been discussed and I feel we are at a good point to sign the Concorde Agreement and move on."

Asked what caused him to claim last week that rival teams were "up the arse" of Liberty, he said: "What frustrated me was that we, as the teams, are not capable of really joining up in order to have a common standpoint. Not in a way that goes against Liberty or FOM, not at all. But we're having these meetings and everybody seems to be interested in the same clarifications, and in the same kind of mark-up for contracts that are necessary.

"Then we leave the meetings, and on air, I hear opinions that differ very much from what was said within the meeting. That is a certain frustration, I don't know why that happens.

"I have clarified my position very clearly with the ones that I think pick up the phone immediately once the meeting is finished.

"I have come to a point that if we are not capable of us, as the teams, to have a joint standpoint for the benefits of the teams, then we'll have to go back and have our own."

And there was us thinking that all that huffing and puffing was a bid to blow the house down.