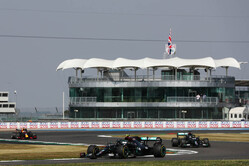 As sections of the media go into overdrive, claiming that we now have a battle for the championship on our hands, based on the evidence of last Sunday's 'perfect storm', despite the fact that the move would compromise his and his team's domination, Lewis Hamilton believes the sport must move away from one-stoppers.

With the tyre failures of the British Grand Prix still fresh in mind, the sport went into the 70th Anniversary race with trepidation, the result of the decision to stick with the proposal that the compounds for the second Silverstone race be a step softer than the previous week.

Pirelli's call on the teams to use common sense was never on the cards, and though the requisite tyre strategy was to cost him, Lewis Hamilton believes the necessity to stop twice was good for the sport and its fans.

Sunday's race saw both Mercedes drivers struggling, even on fresh rubber following their stops, while Max Verstappen, the only driver in the leading ten starters to begin the race on hards, eventually came out on top.

"I was trying to manage but I was trying to keep up with Valtteri, to be honest, and I was struggling, like, within three laps with the rears," said the world champion, "so yes, (I was) managing (my tyres) but it wasn't doing anything to help the issue.

"So then I started to lose ground to Valtteri and yeah, I've got to look into that because it's rare also for me to have as bad as I'd had. Usually I'm on the slightly better end of bad day but today was worse."

Asked about the degradation, he said: "We haven't had deg like this before. So, it's big.

"We've come here with the softer tyres which, I think, has made the race even more exciting as we set about a two stop.

"Part of me doesn't want to propose that we go with softer tyres moving forwards because maybe we'll be in this position again," he admitted, "but ultimately, one-stop sucks.

"We should never be doing one-stops, I think in this sport," he added. "It's never been good watching as a fan. It makes it more exciting when there's more."

Aware that such a move would increasingly bring Verstappen and Red Bull into the game, he said: "I think it's great for... as I said before, I want to have races where they're challenging like today so I'm excited to watch this race.

"Obviously the Red Bull seems to be quite close in race conditions to us and obviously today is stronger so it shows they don't have as bad a package as perhaps people had said in the past but I think it's good.

"It will be interesting to see the progression through the rest of the year and I definitely will not overlook them. I think we've got to keep a close eye on them and keep working to push forwards because I don't think it's going to be easy by any means.

"But I don't think my team has that mentality anyway so we just keep our heads down. I was hopeful today that maybe we would have that - wishful thinking, but hoping to have some sort of race towards the end, but maybe in the future we will get to have some, a bit more."