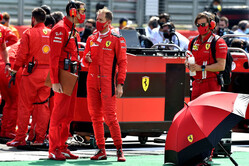 The relationship between Sebastian Vettel and Ferrari took another hit on Sunday, when the German criticised the Maranello outfit's strategy.

Following an unforced spin on the opening lap Vettel fell to last. However, starting the race on hards, like eventual winner Max Verstappen, the four-time champion began to claw his way back through the field.

After pitting on lap 22 he dropped from 9th to 15th, having been released into traffic. However, he was then told to pit just 11 laps later, thereby dropping from 10th to 14th.

"It is in the gap that we didn't like," he told the team over the radio at one point. "We spoke about it this morning. I'll hang in there, but you know you've messed up".

Asked about the radio call after the race he explained: "We spoke this morning and said there was no point pitting knowing that we will run into traffic and, that's exactly what we did.

"We went also onto a hard tyre," he continued, "which we then only had on for ten laps, probably not even that, so it didn't make any sense.

"I mean, why would you put the hard for ten laps and put the mediums for twenty laps. So I was running out of tyres towards the end so we spoke about exactly that so yeah. Not I guess not the best work we all could of done today."

Asked if he felt there is a difference between his car and that of his teammate, Charles Leclerc, who finished fourth, the German said: "I don't know... I mean I guess, something is there that I'm missing, I'm not sure what it is, nevertheless I try to get out of bed and do as best as I can.

"For sure today we could have been higher up," he insisted. "For my side, with the spin, I'm not sure what happened there also with strategy we could have recovered better.

"I think the main difference is we don't have clean races from where we start. He had a couple of clean races so far, so..."