Tyre gamble pays off for Verstappen 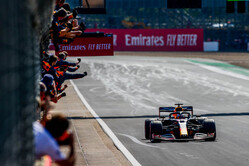 OK, we admit it, we are hoping that Nico Hulkenberg doesn't finish on the podium this afternoon.

Nothing personal, you understand, it's just that we are heartily sick to death at present of writing about Racing Point.

Be it 'duct-gate', the 99% certainty that Sergio Perez will drive in Spain or the countless other stories concerning Otmar Szafnauer, Lawrence Stroll or Aston Martin, we are sick of the bloody name.

Then there's Mercedes and Toto...

If nothing else, whilst we're getting things off our chest, might Valtteri Bottas be allowed to win this weekend, if only to give some faint hope that Lewis might actually have a fight on his hands as he cruises towards that seventh title.

Sadly, the timing of the Finn's new one-year deal is eerily reminiscent of the new deal agreed by Rubens Barrichello on the Friday of the infamous 2002 Austrian Grand Prix.

Other than 'The Hulk's' possible fairy-tale, the other big talking point going into today's race is whether Max Verstappen has gone the right way in qualifying on the hards.

It's a big gamble, as the Dutchman admits, and it's going to be fascinating to see if it pays off.

Thankfully, it's actually an interesting grid today, for other than Verstappen on those white-banded tyres, we have Hulkenberg starting third, Ricciardo fifth, Stroll sixth and Gasly seventh. Throw in Leclerc starting from eighth, just ahead of Albon and Norris, not to mention Sainz, Ocon and Kvyat all starting out of position and you have the makings of an epic opening lap.

You'll note that we don't mention Seb, be it "starting out of position" or even from eleventh, this is because the German isn't here today.

Yes, he's sitting in his car, but his heart isn't in it.

Something has gone badly wrong and it is clear that the 'marriage' has fallen apart. Whatever his involvement with 'that other team', we don't think the four-time champion is tired of the sport, merely out of love with Ferrari. It happens.

Sadly, his former teammate, Kimi, is going through an equally bad patch, as Alfa struggles to hold on to the shirt tails of the midfield.

In light of last week's dramas it is going to be interesting - an understatement - to see how the softer compounds bear up today. However, are we alone in thinking it somewhat naïve of Pirelli to believe that the teams will use 'common sense' in terms of tyre strategy and go for a two-stop strategy as opposed to the "unadvisable" one-stopper?

As we say, Pirelli says a one-stop strategy is unadvisable, so a two-stopper is set to be the strategy. The quickest depends on track temperature and resulting wear on the medium tyre, but optimally it would be to do two stints on the mediums of 15 laps each and then a final stint on the hards of 22 laps.

Alternatively, 12 laps on the mediums, followed by two stints of 20 laps each on the hards.

The second-quickest strategy is to start on the hards with two stints of 23 laps each, then finish on the softs.

Going into this afternoon, one weekend F1 is making the very most of this being the sport's 70th birthday - Mike Lawrence look away now - it's so sad that Liberty has once again opted to take every opportunity possible to make a bit of cash.

We'd accuse Liberty of selling the sport's birthright, but when they can't even get the name of a two-time world champion, and arguably one of the sport's finest, right...

The pitlane opens and the drivers begin making their way to the grid. The good news is that among them is Hulkenberg, who has now covered more distance than he did seven days ago.

"Bring another helmet," asks Sainz, "this one has some painting on my visor and I cannot see." What will that rascal Lando think of next?

"Car felt a bit on the nose, what with the wind," reports Russell.

Of the top ten starters, all are on mediums bar Verstappen, also on the yellow-banded rubber are Sainz, Grosjean, Ocon, Russell, Magnussen, Latifi and Giovinazzi. Like Verstappen, Vettel, Sainz, Kvyat and Raikkonen start on hards.

Bottas leads the field away on the warm-up lap.

"I think my drink tube is blocked," reports Verstappen.

They're away. Bottas and Hamilton get away well, the Briton slotting in behind his teammate for Turn 1. Despite those hards, Verstappen gets the jump on Hulkenberg, while Ricciardo holds off Stroll and Norris gets ahead of Albon.

Stroll gets ahead of Ricciardo in Turn 5, while further back Vettel has spun, the German losing the rear of the Ferrari after running over the kerb while trying to avoid his (slow) teammate in T1. He drops to last.

The two Mercedes are side-by-side in Brooklands, but Bottas holds firm.

While Vettel is running last, teammate Leclerc is a sitting duck as drivers pass him with ease, dropping the Ferrari to tenth and under intense pressure from Sainz who is eleventh.

Lap sees Bottas post fastest lap as he builds a 0.066s lead over Hamilton who is 2.2s clear of Verstappen.

The field settles down much like last week, the only difference being that the leading pair are reversed.

After just 5 laps, Bottas is being told that his front-left tyre temp is critical. And that's while running in clear air.

Albon pits at the end of lap 6, the Thai switching to hards. He rejoins in last position.

Verstappen already reporting fears over his front-left, though he is maintaining a good pace.

Gasly and Giovinazzi pit at the end of lap 7.

Russell pits at the end of lap 8, thereby freeing up Vettel who was running behind and seemingly unable to make a dent on the Williams.

"We are still Plan A," Hulkenberg is told, "we're on target."

Magnussen and Latifi pit at the end of lap 9.

"We're a little bit close for tyres," Verstappen is told, "pull back". "Mate," the Dutchman replies, "this is the only chance of being close to the Mercedes, I'm not just going to be sitting here like a Grandma."

The rear tyres on Hamilton's Mercedes are clearly blistered.

Norris pits at the end of lap 12, the McLaren driver rejoining in 13th, behind Vettel.