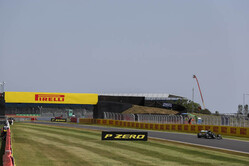 All but one of the drivers in the top 10 on the grid set their fastest Q2 time on the medium tyre, and so will start the race on this compound tomorrow, as per our fastest predicted strategy.

The sole exception was Red Bull driver Max Verstappen who got through Q2 on the hard tyre and so will start the race from P4 on this compound.

Track temperatures were around 40 degrees throughout qualifying, with similar conditions expected tomorrow. Wind was also a factor, which is often a complication at Silverstone, affecting aerodynamic balance. This could be one factor in the cars being slightly slower compared to last week's qualifying, despite having a softer tyre choice.

Unusually, there were different strategies in Q3 as well. Having begun Q3 on the soft tyres, both Mercedes drivers set first and second fastest times using the medium compound.

The stand-in Racing Point driver will start his first grand prix since Abu Dhabi 2019 from third on the grid, having set his best time on the soft tyre.

With the tyres nominated here (a step softer than last week) a one-stop strategy for the 52-lap race is unadvisable, so a two-stopper is set to be the strategy. The quickest way depends on track temperature and resulting wear on the medium tyre, but optimally it would be to do two stints on the medium tyre of 15 laps each and then a final stint on the hard of 22 laps.

Alternatively, 12 laps on the medium, followed by two stints of 20 laps each on the hard.

The second-quickest strategy is to start on the hard with two stints of 23 laps each, then finish on the soft.

Mario Isola: "This was a very unusual qualifying session, with Red Bull's Max Verstappen starting tomorrow on the hard tyres by using them to get through Q2: which is probably a first in our Formula 1 history. He should be able to benefit from the extra durability of this compound throughout the first stint when the cars are heavy with fuel. We also saw the top two fastest times in Q3 set with the medium rather than the soft tyre. These facts alone indicate how this week's nomination for the second race of the double-header at Silverstone has been an interesting one, with the soft tyre providing plenty of initial speed and then dropping off, while the pattern is the opposite for the medium. We knew that the soft was never going to be an ideal race tyre, but the high level of wear and degradation seen on it even in qualifying underlines how the medium and the hard should be the default choice for tomorrow's strategies. We're expecting a two-stopper, so there are a number of variables that could play out."