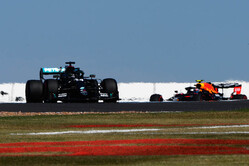 Ahead of today's sole practice session, the air temperature is 24 degrees C, while the track temperature is 33.1 degrees. It is bright and sunny, but worryingly windy.

The morning was interesting in that nobody used anything other than the soft tyres.

While the softs have the pace, they have little or no durability, which at the best of times would pose some interesting strategic problems for the teams.

However, add in last week's failure after the team's ran for too long on the hards, after Daniil Kvyat turned the race on its head, and you have a real conundrum.

Pirelli has called on the teams to use common sense in terms of how long they run on the various compounds, but this comes at a time the teams already appear to be going to war over the Racing Point duct scandal and the Concorde Agreement.

Finally, Chase and the gang are going to witness what Bernie had to deal with for all those years.

Ricciardo was third quickest in the afternoon, but Renault warned fans not to get too excited as they were trying something different in terms of tyres.

The lights go green and Vettel is straight out of the box, followed by his Ferrari teammate. Both are on hards.

Magnussen, Grosjean and Kvyat are next out, the Russian sporting softs.

Kvyat subsequently reports that his steering wheel, "appears to be bent to the right".

Several minutes later, Norris heads out, as Ferrari announces that it has given Leclerc a fresh power unit "as a precaution". This means that both drivers have new engines today.

While Norris is on softs, teammate Sainz heads out on mediums, echoing the mixed strategies we witnessed yesterday afternoon at a number of teams.

Norris posts the first time of the day, crossing the line at 29.236.

Sainz subsequently posts 29.661, as the Ferrari pair head out again.

Sainz is warned of a tailwind between Turns 3 and 4.

The Monegasque is told the track seems slower than yesterday, "probably due to the wind".

"The snaps in Turns 3 and 6 are all down to wind change directions," Norris is warned.

Twenty minutes in and a while gaggle of drivers head out, though the Mercedes and Bulls are not among them.

On his first flying lap, Hulkenberg - who showed strong pace yesterday - goes third with a 28.661.

At which point Bottas heads out... on softs.

"Be firm with your brakes on the out lap," Ocon is told.

As Albon finally heads down the pitlane, Bottas crosses the line at 27.509 to go top, despite a mistake in Turn 3.

PBs in S1 for Albon and Hamilton, while Verstappen goes quickest. Hamilton goes quickest in S2, as Gasly is also looking set to improve.

Verstappen crosses the line at 27.702 to go third, the Dutch drivers unhappy with his final sector.

Russell runs wide after getting caught out by the cross wind at Stowe.

Bottas consolidates his top spot with a 27.462.

The Bulls are going for two very, very slow cool down laps between their flyers.

Albon improves to seventh with a 28.313 on his softs, ahead of Kvyat, Leclerc and Norris.

PBs in the first two sectors, are followed by a poor S3, nonetheless, Verstappen consolidates his third position with a 27.615.

With 21:00 remaining, Vettel is down in 16th, along with the Alfa, Williams and Haas pairs.

As Vettel begins a flyer on fresh softs, Norris goes quickest in S1. The German can only manage a PB.

Norris subsequently goes quickest (27.202), on mediums, while Vettel can only manage 28.954 which puts him sixth.

"Did the wind change direction during that lap," asks Norris, "just give me a yes or no, I don't need speeds or directions."

Despite a poor-ish opening sector, Bottas goes quickest with a 26.784.

Leclerc told he needs to improve "mid-corner" in Turns 9 and 12. The youngster is mystified, but admits to a "little lift".

Ocon improves to fifth with a 27.496 as Hamilton heads out on fresh softs.

After going quickest in S1, Leclerc subsequently backs off.

Hamilton retakes the top spot with a 26.621, despite only going purple in the second sector.

All eyes on Verstappen who goes quickest in S1, only to lose pace in the second sector as he encounters a slow moving Stroll in Becketts. The Dutchman takes the incident in his usual calm manner

The Stroll/Verstappen incident has been noted.

Grosjean improves to 14th, while Ricciardo's bid to improve looks set to be thwarted by traffic.

"Latifi is coming through," Verstappen is told. "I know mate, I'm not an idiot... I'm on the other side of the track!" Mate?

The Alfas can only improve to 17th (Giovinazzi) and 18th (Raikkonen).

Magnussen fails to improve on 20th (28.673) despite looking very smooth. Clearly, too smooth.

Hamilton makes a late appearance but it is merely to scrub a set of softs.

The Briton is quickest, ahead of Bottas, Norris, Hulkenberg, Stroll, Leclerc, Verstappen, Albon, Ocon and Sainz.