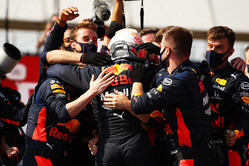 Max Verstappen: "It's a great day and I'm very happy with the result as we did everything really well as a Team. The race showed we had the right strategy after our decision to qualify on the hard tyre and I'm pleased it paid off. I think the length and pace of our first stint was the key to being competitive as the mediums don't last that long, so starting on the hard was definitely the right call. We can see the car works well on softer compounds, especially in the race, and it looks after its tyres. When you are able to overtake and pull away from a Mercedes it is really satisfying. Of course, I hope this will happen a lot more throughout the season and we'll keep pushing them hard even though they have been the dominant team up until now. We'll keep pushing, we have a really good Team spirit and I love that we never give up and do take risks. We will enjoy today because everyone deserves it after all the hard work, before focusing our attention on next week's race in Barcelona."

Alex Albon: "I am happy with today's race and the car was unbelievable. At the beginning of the race it was tricky to overtake with the DRS train but once we had clear air we had a really good chance to get through the field. I was a bit surprised by the balance and race pace today, it was so good, so we need to go away and understand why. It shows we have a lot of potential in the car, it's just hard to unlock it sometimes, but we are good in these conditions so now we know to find out why. It was a good finish to get fifth and hopefully we can now bring some more performance to next week's race."

Christian Horner: "Today is an amazing day for the Team with Max putting in a dominant performance in the race. After taking a risk in qualifying yesterday and electing to start on the hard tyre, Max made it pay dividends with great race pace in the first stint. To our surprise and encouragement, when Mercedes pitted for new tyres we still had better pace on our used hard set. We then switched our strategy to go onto the medium once we got a pit stop clear of Mercedes and re-emerged just behind Bottas who Max re-passed within a couple of corners. Max then covered Bottas off by going onto his remaining hard tyre to the end of the race by which point he was fully in control to score his ninth victory. Alex also put in another very strong race today with some great passes, particularly around the outside of Copse as he progressed through the field decisively to finish a very competitive fifth place. First and fifth today is great constructors points and moves Max up to second in the Drivers' Championship. This victory is thanks to a monumental Team effort from everyone trackside, in the factory and also Honda. We're making great strides and days like today show we're going in the right direction and now we need to harness this potential moving forwards. Now we look ahead to the next race in Barcelona and let's hope it's a hot one!"