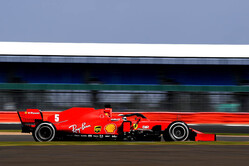 A known lover of the history of the sport, Sebastian Vettel will be keen to put the 70th Anniversary race behind him. Indeed, the four time world champion will want to forget the brace of Silverstone events.

Compounding the German's misery at the track that hosted the first ever round of the Formula One World Championship was the fact that teammate, Charles Leclerc delivered two masterful performances, claiming a third and fourth while Vettel walked away with a 10th and 12th.

Despite a first lap spin that dropped him to the back of the field yesterday, it was Ferrari's strategy that he cited as the reason for his poor finish, pitting him after just 11 laps on his new set of hards and sending him out in traffic.

"It is in the gap that we didn't like," he told the team over the radio, "we spoke about it this morning. I'll hang in there, but you know you've messed up".

Speaking at race end, Mattia Binotto disputed Vettel's claim suggesting that it was that first lap spin that was to blame.

"He is going through a difficult time in qualifying," the Italian told Sky Italia, "and the last two races where he hasn't found confidence in the car.

"Here, he spun putting his wheels on the kerb, and his race was uphill," he added.

"I honestly think there is little to say about strategies," he continued. "We were early perhaps by a few laps with the call that made him lose the position to Raikkonen, however, we knew he would recover without losing time. It allowed Charles to continue his comeback.

"Overall, it was the right choice for the team and we don't think we penalised Sebastian," he added. "He regained the position immediately on Kimi, he wouldn't have been able to do an overcut on Kvyat, because he was going as fast as he was at that time, and then he undercut Sainz. His race was compromised at the start, and I think that was the key, not the strategy chosen."

Asked, in light of the German's attitude of late signals a loss of faith in the team, Binotto said: "I don't think Sebastian has lost faith."

Indeed, in a bid to aid the German, Ferrari is considering a number of options, including a new chassis.

"It is something at least which I didn't discuss yet," said Binotto. "That's part of the discussion we have within teams. I think we are open if it is something that may help. Why not?

"I think whatever we can do to help is important for us, for Sebastian, and I think from a team point of view and a driver point of view, to try to make better in the next races. It is important, so open to do it. I will leave it to the driver and the team to discuss and decide."