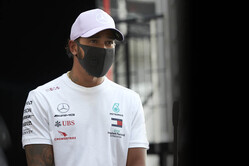 Other than the fact that the FIA is seeking to ban alternate engine modes - especially those used in qualifying - it is the timing of the ban that causes concern.

At a time the paddock is already divided by the ongoing row over 'duct-gate', which appears to put the Mercedes-powered teams at odds with their rivals, the German team is leading the way in terms of opposition to the new Concorde Agreement.

Now, as the German team appears to be cruising to another brace of titles, the FIA has announced that it intends to ban alternate engine modes, most notably the 'party mode' that has helped Mercedes set the pace in qualifying in recent years.

While we await Toto Wolff's reaction with bated breath, bucket of popcorn at the ready, Lewis Hamilton has spoken of the ban, and on the face of it the world champion isn't bothered.

"It's not a surprise, they're always trying to slow us down," he told reporters at Barcelona.

Asked if the ban would impact his team more than most, he replied: No... and just going back to the fact that at the end of the day, the guys on our team have done such a great job with the engine.

"It's obviously to slow us down," he added, "but I don't think it's going to get the result that they want, so that's totally fine if they do.

"It's impossible to know with other engine manufacturers how much they can actually gain when they do it all-out in qualifying and if we're gaining more or not," added teammate, Valtteri Bottas. "We are not panicking about it, if that regulation comes it's the same for everyone.

"But when I heard about the possibility for the first time, actually this morning, the first thing that came to my mind is the races, because every team obviously has different modes in terms of how much they want to risk in terms of wearing the engine and sometimes when they can change the performance.

"It's the same for us," he continued, "we can save the engine if we have margin, and also in terms of strategic things in the race, for drivers many times we are using different modes whether we are defending, attacking.

"So from my side it feels like if it could be the same engine mode for everyone all through the race, I think there could be less overtaking because everyone is just running the same modes instead of playing with them and trying to maximise every situation with sometimes using more power, sometimes less.

"In the end it would be less things for us to do while driving. Obviously it's not up to us but we'll take it if it comes."