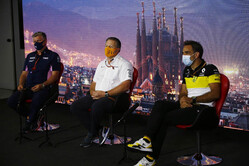 Please can we start with a quick résumé from each of you about the first practice session that has just ended?
Cyril Abiteboul: Typical FP1 Barcelona. We see drivers getting familiar with the track. So, on our side we have done something a little bit different this time, because we are already focussed on the race, in particular coming out of Silverstone where we feel that we underperformed in the race in particular. So, again, we want to have as much understanding as possible from how the tyres will behave on a long run, so we elected to run the Soft at the start rather than at the end. So obviously it doesn't look great in terms of timing but again, that's not what we were after this morning. Car looks OK, nothing really new. We'll find out more this afternoon.

Zak Brown: It was kind of business as usual for a Friday for us. I think probably the only thing of note was changing Carlos' chassis, with our cooling issues that we had on his car just to make sure that kind-of ran as-planned. Any time we do a chassis change we want to make sure there's no kind of niggles with the car from a reliability standpoint. It was an uneventful free practice one.

Otmar Szafnauer: Similar to what Cyril said. We're again trying to learn about the tyres for the race. We're not really focussed on one-lap performance yet and we did exactly the same as Renault. We ran the quali tyre quite early and there was a bit of track evolution towards the end - but it was all about focussing on Sunday.

Zak, if we could come back to you please. McLaren has withdrawn its intention to appeal the Racing Point verdict. Please can you explain that turnaround?
ZB: Yeah. When the verdict came out early in the race weekend in Silverstone, you're in the middle of preparing to go motor racing, so we don't have a lot of time to digest the verdict. And so with the intent to appeal - which you have to make pretty quickly - you just buy yourself some more time. There were contradictory statements from what's been made from Racing Point, from a design, their own IP, and we're referring to specific details, such as 192.168.1.1 etcetera on the brake ducts. The ruling from the FIA, they made some contradictory statements. So we wanted to take some time to understand it and then, over the course of the weekend, had several meetings, lots of discussions with the FIA and they made it clear that, from a bigger picture, we want to make sure that Formula 1 remains a constructors' championship, as it's historically been. I think the FIA agrees with that philosophy, as most people do. Just got a lot of confidence that the FIA will ultimately address that issue. Obviously Renault and Ferrari have continued with their appeal, which we respect, and are confident we'll get the right outcome for the long term.

Cyril, coming to you. Is it encouraging for you that McLaren have decided not to continue?
CA: I'm not sure how to answer that one. It's not a matter... we are not deciding what we do based on what others are doing. We define our own strategy. which is very much a high-level strategy for the sport, as Zak has pointed out. Indeed, what we are seeking since the start of that process, it's not a legal outcome, it's not a degradation of the relationship between teams or team principals in the paddock. It's really some answers to a situation, to a precedent that has been set; a disruption that has been brought into the sport and that's what we're after. We don't think we have a clear resolution to that as of yet. We've been at the start of that process. We want to make sure we lead that process until there is a crystal clear outcome that cannot be turned around once things are settled. I'm not talking about a legal settlement: I'm talking about settlement in general. We want in particular satisfaction that the rules will be changed. We have indication that it will be the case - but until it is the case, in that environment we know that you can't back-off. So that is what we are after. As Zak has mentioned, we are expecting that Formula 1 confirms again that it is a sport for constructors. Not just OEMs but constructors that design the whole car; that create the whole aerodynamic concept and that each car is its own aerodynamic concept. That's what are after. We appreciate that the rules are not clear and that's what we are seeking from the process.

And Otmar, coming to you, is it encouraging that McLaren and Williams have decided not to continue?
OS: A little bit. A little bit like Cyril said, we've appealed the decision based on what the stewards had written in their findings. The findings are pretty clear that, y'know, we didn't do anything underhand or dishonest. We were completely transparent and open with the FIA throughout their process of checking both our brake ducts and the remainder of our car. It was basically... they concluded that the rules, especially for brake ducts, transitioning for a non-listed part to a listed part, were ambiguous and unclear and because of it, we believe our punishment for an unclear and ambiguous rule, that we didn't intentionally contravene, is a bit harsh. It's the reason we're appealing and we're very confident that we'll win on the appeal.

(Dieter Rencken - Racing Lines/racefans.net) Question for Otmar. Otmar, you're obviously aware of the letter that was sent by Peter Bayer to the various teams on Tuesday, or Wednesday. How does this affect your business model going forward - because this, of course, doesn't appear to be contingent upon the outcome of the appeal. The FIA has pledged to change the photocopier-type approach. They've pledged to change the engine modes, and there's also talk about the tokens possibly being changed - although that wasn't into the letter. What does all of this do to your business model? Because I would imagine that you're the most affected team.
OS: I don't think it changes our business model at all Dieter. We're not the most affected team. We've got 500 employees. The reason we don't have 700 or 800 like some of the bigger teams is that we lack in in-house manufacturing. But if you just compare us to everyone else in design, development, aero personnel, we are the same. We're the same as the big teams. It has zero impact. We've always been a constructor, from the days of Jordan to the days of Racing Point and everywhere in between. So, we've got the capability of designing, developing, constructing all of our own components. It will have zero impact on our business model. If the rules become more clear, we will stay within the bounds of those rules. Absolutely no problem.

(Scott Mitchell - The Race) Question to all three, starting with Otmar. With the token system and the concession for teams that are using 2019 gearbox and rear end, being able to switch to the 2020 component without spending tokens, Otmar, is that something Racing Point is planning to do. And then to all three, do you think that sort of concession will stay in place - or do you think there's still room to negotiate so that this free change isn't possible.
OS: So this was discussed, I think, starting in April and May of this year and it is a unique year, due to the pandemic that we're facing, and the uniqueness of this year is freezing components that we usually wouldn't freeze from year-to-year in order to save money. And this is how we got here. We all agreed, back in May, the token system that's in place now. And for us, for example, it's way too late to go back on that. We've stopped developing this year's car a while ago and we're in full development of next year. And because we buy our components - the gearbox we buy from Mercedes - it's not really up to us to be able to control what we buy. We can only buy what they sell us.

Zak?
ZB: Yeah, to Scott's question, anything is possible until the 2021 season starts. I think sometimes with these regulations there is unintended consequences. It seems to be a bit out of balance that we have to use our tokens for our power unit change and other teams don't necessarily have to spend tokens and yet are going to get a free upgrade. So, I think it is something that needs to be revisited and see if there can be a fairer conclusion brought to this unique token situation this year.

Cyril?
CA: Just to be clear, the token principle is right - but that exception described by Scott indeed is wrong. We've said it since Day One. We said it in April, and then again in May. We vote for the package of measures as it was presented in Strategy Group and thereafter into the World Motor Sport Council with the explicit mention that we were not supportive of that element of the regulation - but it was a package and that would be agreed as such. I think since then that more teams have realised the unintended consequences - or maybe they were intended consequences - of that clause and we standby what we said back in May. I think since then there are more teams that realise and therefore more teams have expressed concerns. So, yeah, I think it will be up to the FIA to define if that is something that they want to revisit. But if you were to go with the majority of teams, that's something that today would clearly be revisited.