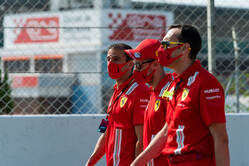 Shortly after Ferrari announced in early May that it would not be extending its contract with Sebastian Vettel, it became clear that there was more to the decision than it appeared.

Amidst claims that he had refused a drop in pay, Vettel said that there had been no serious contract negotiations, far less demands, and that he had been surprised by the team's decision.

The team subsequently back-tracked on some of the comments that had been made, but then, once the season finally got underway the relationship appeared to worsen.

While Charles Leclerc put together a string of impressive performances - his race-ending clash with Vettel in the Styrian Grand Prix aside - the German has struggled, to put it mildly.

Citing unease with the SF1000, Ferrari appeared to dismiss his claims, whilst the German's complaint of poor strategy in last week's Anniversary race were blamed on his first lap spin.

With the relationship clearly in trouble, sections of the media have been claiming that the Italian team might 'do a Prost' and drop Vettel before season end.

Speaking ahead of this weekend's Spanish Grand Prix however, Vettel was keen to play down talk of rising tension.

"No, I don't agree with the statement," said the German when asked if his relationship with the team had become tense. "I think we are trying to do everything we can, and it is never relaxed if things don't go your way or they go wrong.

"Naturally, if you judge the emotions right after the race or during the race, I don't think that is a fair reflection of what is going on," he added, "hence why I tend to disagree.

"I didn't have a great race and we tried to come back up, and could have opted for a different strategy," he explained, referring to last week's race at Silverstone, "but we didn't, so we've talked about it, sorted it out and moved on.

"There is not much different in terms of climate compared to the week before, or the week before that," he added, a comment that doesn't exactly answer the question.

Asked about talk of an early divorce, he said: "We haven't even considered or spoken about it.

"I guess it's not just a question for myself," he admitted, "but I know what I'm capable of, I know the job that I can do.

"At the moment, it's not been the cleanest run, but yeah, I'm sure if things calm down, and I get a decent chance, then I'll use it."