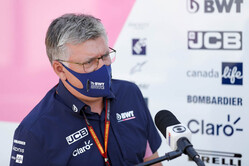 The teams had 24 hours from the time of yesterday's hearing result to decide whether they intend to appeal, and after that they have a further 96 hours in which to decide if they intend pressing ahead.

While Renault has now joined Ferrari, McLaren and Williams in confirming its intent to appeal, Racing Point is also intending to appeal but for obviously different reasons.

Racing Point clearly feels, having insisted that its car is legal, that the fine and points deduction is wrong, while the four rival teams feel the punishment is not harsh enough. Indeed, they are particularly incensed that though the rear brake duct is in breach of the sporting regulations, Racing Point is allowed to continue using them without fear of punishment, only a reprimand.

Ferrari, McLaren, Williams and Renault believe that ultimately, as Racing Point improves and scores more points, courtesy of an 'illegal' part they are being penalised.

They also argue that in effectively giving Racing Point the green light the sport is leaving itself to further instances of copying.

"Racing Point has been found guilty," said Zak Brown, "and I am concerned that they still have those... what were deemed illegal in Austria on the race car now.

"I think that is confusing for the fans, how something that is not legal in Austria is still on the car.

"Around this whole copying, obviously they claimed that they had coped the car via photography," he continued. "It's clear from reading the document that is BS and therefore you have to question anything else around that car.

"I think this is, potentially, the top of the iceberg," he warned, "the starting point of looking at what's happened here, because I don't think it's healthy for the sport."

"One thing that is important is that it has somehow been clarified that there has been a breach of regulation," added Mattia Binotto. "I think that is the starting point. Obviously that is relative to the braking ducts but there is an entire concept behind, which is about copying: are we allowed to copy or not, an entire concept. The two things need to be split.

"On the braking duct there is a breach of regulation, that is a fact and it has been clarified. Is the penalty sufficient or not? Again, I think we need to go through carefully the 14 pages. There are 24 hours eventually for an intention of appeal. I think as Ferrari we will be very careful in understanding and deciding what is the next step."

"It's a bit disappointing," said Otmar Szafnauer. "We thought we are well within the rules and did absolutely nothing wrong.

"We invited the FIA in March to come and view everything that we did. We had full disclosure," He added. "Thereafter, they wrote to us and said we were completely compliant. So that's a bit disappointing.

"However, we now have to assess the sanction that was given. The FIA have acknowledged the rules of non-listed parts going to listed parts were far from clear and ambiguous and they could be viewed from two different sides.

"The initial thought is that from our perspective, we did nothing wrong so that's unfair. There's always two perspectives, I guess. The FIA were the arbiters on this. We now have to discuss with the FIA what is going to happen going forward."