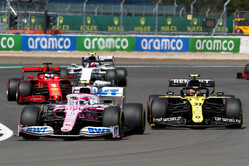 While a $400,000 fine for a team owned by billionaire Lawrence Stroll will be seen as a slap on the wrist, the loss of 15 championship points will prove a little more damaging.

However, with the RP20 allowed to continue racing 'as is', even though the Silverstone-based outfit has been found guilty of breaking the rules, the points will soon be clawed back, and with them further points that while adding to Racing Point's coffers in terms of prize money, will deprive other teams.

Speaking in the wake of the decision, and with disbelief and anger slowly mounting in the paddock, Renault boss, Cyril Abiteboul admits that his team is considering appealing the result of the hearing.

"I can confirm that we are considering whether or not to appeal," he said. "It happens that usually we have one hour to do that, but in this particular case given the complexity we have 24 hours, and then 96 hours to confirm or not the appeal.

"Again, because it's complex we need to balance carefully the interest of the sport," he continued, "and the consistency of the sanction.

"We are looking at whether or not we will appeal the sanction, not obviously on the decision."

Asked about the stewards findings, he said: There is a very specific and targeted discussion and protests in relation to one part of the car, brake duct, front and rear.

"And in relation to that we are satisfied with the fact that the FIA stewards confirmed that some of these parts were in breach of the sporting regulations.

"So, we are satisfied with that conclusion. I think that the question of sanction is open for debate, and could probably be discussed endlessly.

"We will consider that matter, bearing in mind that the advantage that was obviously obtained will keep on going for all the season. And it's a very material advantage."

In reaction to the news that the FIA is to amend the 2021 regulation in reaction to today's findings, he said: "I think we need to recognise that what Racing Point has done, based on a car that has such an advantage against anyone else on the grid, has been a shock in the system, and has been a disruption. We need to see how we deal with it.

"Yes, copying has been part of the story of F1," he agreed. "But technology has evolved so much, that it's now possible to do things that were not possible to do before.

"We've been pleased with the statement from Nikolas Tombazis this morning, in parallel to the stewards, about his willingness to tackle that matter and to tackle it strongly.

"But we need to understand exactly what was behind that statement. That's why, again, we'll take a bit of time before deciding what's our course of action from that point or not."