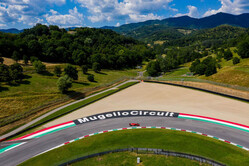 Whether it be choosing a picture for an article or walking down the street, it is still difficult to come to terms with the fact that the global pandemic has effectively turned life on its head.

A few months ago, certainly in the UK, the sight of someone walking down the street wearing a mask on their face would have caused alarm, now it is the (new) norm.

The pandemic is slowly filtering into every aspect of our lives, and despite the sensationalism and conflicting reports in the media, most of us are aware that rather than a "second wave", the first has not yet gone away.

Formula One has done well to get back on track, indeed it is the only 'global' sport to have attempted to do so, far less (fingers crossed) succeed - even if Lewis Hamilton and Mercedes appear determined to spoil it all by totally dominating the season. Again.

Normally, this is the time of year when we would expect F1 to put out the provisional calendar for 2021, but as it stands the full schedule for this season has yet to be confirmed.

FIA president, Jean Todt has confirmed that while F1 is currently working on a "standard calendar" for next season, with no end to the pandemic in sight it is likely to be an ever evolving project.

"There is a reciprocation of the role between Formula 1 and the FIA, the commercial rights holder and the regulator and legislator," said Todt, according to Motorsport.com.

"It's very much dependent on member states' positions," he admitted. "You may have one event in the calendar, but you may have the country who consider no sporting events can be hosted, or can consider quarantine will be obliged if you arrive in a country, or if you come back to a country.

"I'm convinced that the '21 championship, and I mean more globally than Formula 1, will be able to be creative and flexible," he said, "because unfortunately, that's my belief, we will not be over with the pandemic."

Due to the strict limitations the 2020 schedule has seen the sort return to its Euro-centric roots, with the likes of Nurburgring and Imola making their return to the calendar, while the sport pays its first visit to Portimao and Mugello.

Due to the uncertainty over the pandemic, Todt admits that the sport may need to continue the task of finding 'back-up' circuits capable of hosting a round of the world championship.

"I'm sure that it's the responsibility of the Commercial Rights Holder," he said, "but of course as much as we can collaborate, we do it.

"Something is sure, F1 has to be hosted at a Grade 1 circuit. It does quite limit where you can go.

"Saying that, it's quite pleasing," he continued, "because when you see the list of Grade 1 circuits, there are quite a lot where no motor racing has ever been organised.

"That kind of research needs to be done again upon the situation which will occur. At the moment, the work is on establishing a standard calendar."