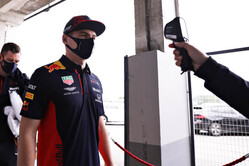 Though Racing Point insists that Sergio Perez did "nothing wrong" in travelling back to Mexico to visit his injured mother after the Hungarian Grand Prix, the fact is that the Mexican somehow contracted the coronavirus and risked bringing it into the F1 paddock.

The teams, indeed the sport itself, has made no secret of the fact that virus or no virus the 2020 season had to be run, and in a move that has shown most other sports the way, implemented a strict set of protocols.

The latest figures revealed by F1 yesterday show that in the last five weeks there have been 18,965 tests for the virus, with two proving positive in the week ending 17 July, and then Perez.

Previously, Valtteri Bottas and Charles Leclerc were warned after travelling to their homes and appearing to mix socially with friends, while the break between the Hungarian and British Grands Prix has allowed most drivers and senior personnel the opportunity to leave their team bubbles whilst strictly observing the protocols.

Nonetheless, in light of what happened with Perez, and the fear that further cases could have serious consequences for the sport, some suggest the rules need tightening.

"The code, as it's written now, in between the Austria races and in Hungary, we shouldn't have left and gone outside which our drivers didn't do," said Otmar Szafnauer, "neither did our team personnel.

"For example," he continued, "we had a rule that once we were in Hungary nobody could leave the hotel, even if you had a Schengen passport. We treated everybody the same including the drivers.

"But in between Hungary - because we had that weekend off - I think everybody went to wherever their families were," he admitted. "I think the Italian teams went back to Italy, probably the Swiss team went back to Switzerland, probably Pirelli went back to Italy and the drivers went to their home countries.

"In hindsight, and hindsight's a wonderful thing, perhaps we should look at that, change the code and say throughout the season, you stay within your bubble.

"I don't know but that's something for the FIA to consider. I read through the code a couple of times now and it is a living document, so they say, at the very beginning, from time to time, as we learn, this will change so perhaps that will change.

"I don't think Checo did anything wrong going back to his family," he added. "He takes all the precautions. I think it's no different to Ferrari going back to Italy, for example."

"I think it's a stark reminder," warned Christian Horner, "that, you know, sometimes in Formula 1 we are a bit isolated and we all live in our bubbles anyway, and I think that when it happens to somebody like Perez, a driver, is affected like that, it's a stark reminder that these procedures are here for a reason and the procedures we take as a team, the procedures we take as a collective in Formula 1, we do everything we can to ensure that as little unnecessary contact is made either at the race event, away from the race event, within the factory.

"It's very, very difficult and it's a stark reminder that this thing hasn't gone away yet. It's still out there and we are going to be travelling to countries where obviously there are second waves and peaks that are still bubbling away. And that's where as a group, as Formula 1, we do need to keep that discipline with the procedures that are in place. I think that the whole thing was handled well and executed well by the FIA and by the team."

"We always tell to the drivers, but not only the drivers, to all the team members: stay disciplined, which means keep the mask on, wash your hands, clean your hands," said Franz Tost. "Stay with people whom you know and also there keep a distance, don't go to parties and try to keep the virus away, because we have seen now how dangerous the situation in reality is and looking back to March nothing big has changed, because medicine is not able to come up with a vaccine and therefore we will see."

"The FIA, FOM and the team handled it well," agreed Guenther Steiner. "We just tell our people to keep to the guidelines and not to do anything different, but we know it can happen, as we found out. It can get everybody.

"But then if you have a good reaction to it we can limit from spreading anymore. But we just have to be responsible, each of us, because we cannot follow each person, what he's doing outside the race track, but hopefully we can be all responsible and sooner or later this virus is going away when our team is instructed to behave by the guidelines."