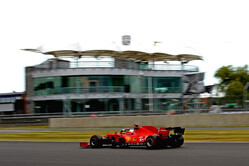 For the second time this season, the Formula 1 circus is tackling a second consecutive weekend at the same track. After Spielberg which hosted the Austrian and Styrian Grands Prix, we now have Silverstone hosting the Formula 1 70th Anniversary Grand Prix one week on from the British round. Scuderia Ferrari got through its planned programme during the three hours of track time, even though with five minutes left in the second session, Sebastian Vettel had to park his SF1000 at the side of the track with an engine problem.

Like all the teams, Scuderia Ferrari was able to rely on data gathered last week, thus able to concentrate on fine tuning the car and evaluating the tyres. In fact, this was one of the only changes from the previous round, as sole tyre supplier Pirelli has as usual supplied three of its five dry weather compounds here in England, but one step softer than last week for each compound. The Soft and Medium from a week ago now become the Medium and Hard respectively. Charles and Seb therefore immediately tried to new Soft to evaluate it.

In the first session, the Scuderia Ferrari drivers completed a total of 41 laps, 20 for Leclerc, the best in 1:27.062, which was the fifth fastest time. Vettel did one lap more with a best of 1:27.498, good for seventh place.

In the second 90 minutes, Charles and Seb ran the Medium and Soft tyres in both qualifying trim and with various race simulation fuel loads. Both drivers set their best time on the Softs, Charles in 1:26.812, seventh fastest and Sebastian 1:27.198 (14th.) However, they began their long runs with different tyres: Soft for the Monegasque, Medium for the German.

Leclerc did 32 laps, two more than Vettel who had to stop at the side of the track with a broken engine. The car was brought back to the pits and the damaged engine will be sent to Maranello for an in-depth analysis to find out what caused the failure. The need for a new engine is penalty-free for the German as the maximum permitted number of power units has not been fitted to his SF1000.

Charles Leclerc: "It wasn't bad today, although a bit more difficult than last Friday. We are working to try and understand the tyres, as there's quite a big change of grip between the Medium and the Soft. We are a bit too slow on the Medium, which is unusual for us.

"The car balance feels pretty good, it's just the general performance which is not as good as we had hoped for on the Medium. There are still a few things to work on in view of qualifying tomorrow with the aim of going through Q2 on Medium tyres, which we think a lot of cars will try to do.

"Anyway, it'll be very interesting to see what compound everyone will start the race on and it should be an unpredictable race with many different strategies."

Sebastian Vettel: "We tried a couple of things today and overall I'm a little bit happier than last week, but we are not very competitive at the moment and we need to have a look at the data to see what we can work on.

"On the Soft tyre the car is good on the first lap, then it becomes a bit more difficult. We are trying to save the harder compounds for the race, so we need to see where we are in quali and then we will decide the strategy for the race. There are some key area where we need to try to improve the car. They are probably small things, but hopefully we will get a bit more competitive.

"On the engine failure I can say that it was very sudden. We have to see what it is but it will take some time, because the engine has to be sent to Maranello for analysis."