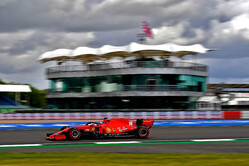 Charles Leclerc will be on the fourth spot on the grid and Sebastian Vettel the tenth, when the British Grand Prix starts tomorrow at 14.10 local (15.10 CET) at Silverstone circuit.

In this phase, the team decided to split the strategies, sending Charles out for his first run on the Medium tyres and Seb still on Softs. The Monegasque set a great 1:26.203, while the German did a 1:26.455. As usual, everyone went out for one more run and again the Ferrari duo opted for different tyres: Seb tried to do a time on the Mediums, while Charles waited for the very last seconds to leave the garage on Softs, but he aborted the run as soon as it was clear that his time on Mediums was good enough to make the cut. Only a few drivers managed to improve, so both Scuderia drivers were into the top ten shoot-out. Charles will therefore start the race on Medium tyres, which will be a significant factor in terms of strategy with Seb on the Softs.

For the twelve minute session to set the places for the front five rows of the grid, both drivers had two sets of new Softs available. On the first run Charles stopped the clocks in 1:26.013, while Seb did a 1:26.339. Back on track with the second set for the SF1000s, Leclerc produced a great lap of 1:25.427, improving by six tenths, to secure fourth place on the second row. Vettel unfortunately had his best lap of 1:26.077, which would have secured him a place higher up the grid, disallowed for exceeding track limits at turn 9 and thus has to start from the tenth slot on the grid. So far, Sebastian has had a tough weekend. Technical problems mean he only managed 25 laps in the whole of Friday and again this morning, in free practice, he had a problem that delayed him in the final stages of the session.

Charles Leclerc: "A much better quali than we had hoped for. I am very very happy with the job we have done and with my final lap, where I think I got everything together and the car was feeling pretty good in terms of balance. I don't think there was anything more to extract from the car and I am very pleased with P4. Also, I had a great lap in Q2 on the Medium tyres, which got us through to Q3. It was a really good decision!

"We have been struggling yesterday with race pace so realistically it's going to be difficult tomorrow, but we have changed the car a little bit overnight, which didn't affect our quali pace apparently, and with a good strategy, I hope we'll manage to get some advantage from our tyre choice. I'm really looking forward to tomorrow and hopefully we can score some good points."

Sebastian Vettel: "I have struggled a little bit the whole weekend so far and qualifying was a bit up and down. It was not ideal, as I found it difficult to get the car working for me, even though it was not too bad. I had trouble getting into a rhythm.

"So, it was not a good session and although we made it to Q3, we were not on the ideal tyre and didn't make enough progress."

Laurent Mekies Sporting Director: "It was a very intense qualifying that ended with one driver fourth and the other tenth. Charles' performance was magisterial, not just to get on the second row, the best we have done during this difficult start to the season, but also because he made the cut to the final part of qualifying on the Medium tyres, which is the best choice for the first stint of the race.

"Sebastian has had a rather troubled weekend so far and all the time he lost because of various technical issues certainly didn't put him in the best possible shape for qualifying. Tenth place is essentially a logical consequence of that.

"Of course, we can't be satisfied with this result, especially when one looks at the gap to pole position. We know we have a lot of work to do to close this gap and that's what we are working on. Tomorrow's race will be difficult, especially when it comes to tyre management. As usual, our aim is to bring home as many points as possible."