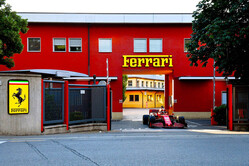 Desperate to get its 2020 (and 2021) assault back on track, Ferrari has announced a restructuring of its technical department, in a bit to be "more effective and assure a more holistic emphasis on performance development".

"This has been achieved by instituting a chain of command that is more focused and simplified and provides the heads of each department the necessary powers to achieve their objectives," says the Maranello outfit.

To this end, it has also established a new Performance Development department, headed up by Enrico Cardile.

The other main areas are unchanged with Enrico Gualtieri in charge of the power unit, Laurent Mekies as Sporting Director and in charge of trackside activities, while Simone Resta will continue to lead the Chassis Engineering department.

Of course, most will argue that team principal Mattia Binotto should focus entirely on the technical side and a 'specialist' promoted or brought in as team principal.

"As hinted at a few days ago, we are making changes to the technical side of the organisation so as to speed up the design and development on the car performance front," said Binotto.

"A change of direction was needed to define clear lines of responsibility and working processes, while reaffirming the company's faith in its technical talent pool.

"The department run by Enrico Cardile will be able to count on the experience of Rory Byrne and established engineers such as David Sanchez. It will be the cornerstone of the car's development.

"We believe Ferrari personnel are of the highest level and we have nothing to envy about our main competitors in this respect, but we had to make a decisive change, raising the bar in terms of the responsibilities of the department heads.

"We have said it several times, but it's worth repeating: we have started to lay the foundations of a process which should lead to a new and enduring winning cycle. It will take some time and we will suffer setbacks like the one we are experiencing right now in terms of results and performance. However, we must react to these shortcomings with strength and determination to get back to being at the very top of this sport as soon as possible. This is what we all want and what our fans all over the world expect of us."

In the eyes of many, this will be seen as too little, too late.

Speaking in the wake of Sunday's race, which saw Sebastian Vettel finish sixth and teammate Charles Leclerc 11th, admitted that action was needed.

"After three races, it's clear that we are in worse shape than we expected and we need to react without delay," he said. "The entire car project has to be revised," quickly adding, with a nod to last year's 'problems, "while taking into consideration the limits currently imposed by the regulations.

"I am well aware there is no magic wand in Formula 1," he continued, "but we have to step up a gear to turn things around, both in the short and the long term.

"It might also be necessary to look at our organisation," he admitted, "to improve and strengthen our working methods where the need is greatest. But first, as a team, we need to understand the dynamic that led to this situation.

"I have confidence in the people who work in the Gestione Sportiva," he insisted. "We have started out on a long process that should lead to another winning cycle. It will take a while, but the whole company understands and supports this vision.

"It's not by sacking people that you make a car go faster," he declared, in response to some of the recent demands in the Italian media. "It will take a long time. Patience will be required.

"The updates we brought in Austria proved correlation, and at the moment, at least we have addressed that but the deficit in terms of performance is still there.

"We are lacking speed on the straights, lacking speed on cornering. Overall, the car has to be improved in all the areas. It's as simple as that. It's not something that a simple trick will address it, or a simple solution or package. It will take time. How long? I don't have the answer yet."