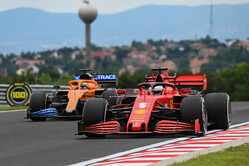 Scuderia Ferrari got on with the work it was unable to complete at the Styrian Grand Prix, because of the bad weather that led to FP3 being cancelled and then the incident at turn 3 on the opening lap of the race. It meant the team was unable to evaluate the upgraded parts it had introduced. During Friday free practice in Hungary, Sebastian Vettel and Charles Leclerc therefore continued gathering data on the new aero package introduced a week ago. They covered a total of 77 laps and Vettel set the fastest time in the wet second session.

This morning, both SF1000s were in the same configuration as at the Styrian GP, thanks to the great efforts of the people in Maranello who, in record time, rebuilt the components damaged in Spielberg. The two drivers ran different tyre programmes: Vettel started on the Hard tyre posting a 1:19.032, while Leclerc was on Mediums when he did a 1:18.803. They rapidly improved getting down to 1:18.408 and 1:18.285 respectively. It then began to rain quite persistently so all the drivers returned to the garages.

When the track dried out, the two Ferraris went back out and set their best times: Vettel in 1:17.238 and Leclerc in 1:17.464 to go sixth and seventh. The final part of the session was spent as usual working in race trim. Both drivers set consistent times over their long run, completing a good number of laps.

The second free practice session for the Hungarian Grand Prix was significantly affected by rain that fell heavily on Budapest from 2pm. Sebastian Vettel was fastest in the very wet conditions, while Charles Leclerc was tenth.

The cars stayed in the garages for the first part of the session, waiting for conditions to improve. The particularly cool weather was not much help in drying out the track, even when cars began running. The Scuderia Ferrari drivers waited for some other cars to go out, but there was still not much grip to be found, so Seb and Charles waited a further ten minutes and then went out on Wet tyres. Sebastian soon showed he was comfortable and after a few laps, stopped the clocks in 1:40.464. Charles made a couple of driving errors on his way to a 1:43.725.

Sebastian Vettel: "I think this morning was ok. This track should be a bit better for us and let's hope that's the case tomorrow, but we won't know until we hit qualifying.

"We did more laps than others in the wet, because after the weaknesses we showed last week, we need to understand the car a bit better. We need laps to gain confidence in the car. It's not a secret that there's still a lot of homework to do, but overall we seem to be a bit more competitive.

"The weather looks like being changeable in the next few days, but if it's dry like Austria, it'll be ok as we were also good this morning on a dry track. I am looking forward to tomorrow."

Charles Leclerc: "Today things went better than we expected. We arrived here with basically the same car we had in Austria but it seems to suit this track better, which is good to see. There are fewer straights here compared to the last race venue and here, we are quick around the corners.

"This afternoon, in the rain, we struggled a bit as we were trying out a few things and I wasn't very happy as I was lacking a bit of confidence in the wet, but we've seen some positive signs this morning. In my first run on extreme wet tyres I only did two laps, which is not really representative, but looking at Seb's lap time on the same tyre, he did a great job and there's probably something positive to take from that.

"I am really looking forward to tomorrow. Hopefully we can convert these positive signs in free practice into a positive result in quali and in the race but there's still quite a lot of work to do on my side and I'll try to be in a good place tomorrow."