Brawn: Ferrari has "long road ahead" 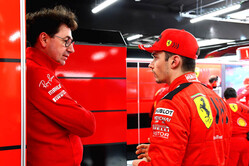 Whatever one might think of Ferrari, the fact is that the Italian team brings a certain style to the sport, a certain passion, a certain excitement, admittedly along with a certain amount of baggage, but no matter one's view of the Maranello outfit the sport needs it to be in the mix.

However, still reeling from last year's investigation into its engine, the Italian team has got off to the worst possible start. At a time rivals continue to question how the investigation was handled - and what results it produced - Sebastian Vettel suggests a certain underhandedness in the team's dealings with him, and then an over-eager Charles Leclerc manages to take out himself and his teammate in the opening laps.

Life at Maranello is never easy, and even Michael Schumacher suffered four torrid seasons before Ferrari finally got it right.

Now, Ross Brawn, who has been in the thick of it, and oversaw the German's five titles with the team, admits that recovery will not be easy.

"One of the biggest problems for Ferrari is that of all the teams on the grid, they come under the closest scrutiny from the media, particularly in Italy," he writes in his review of the Styrian Grand Prix weekend for the official F1 website.

"I know from my own experience that the media pressure in Italy can be incredibly intense, and you have to make sure it doesn't get to your people.

"The management have to cope with it and make sure the staff maintain the faith and stay focused on what needs to be done," he continues. "They aren't going to turn it around overnight, and there's a long road ahead of them.

Referring to yesterday's incident, which prevented the team gaining further insight into the updates it had hurriedly brought forward, Brawn writes: "As a team boss, you never want to see that happen, but this will hurt Ferrari even more given they had worked hard to bring their upgraded aerodynamic package to Austria a week ahead of schedule - and the collision between Sebastian Vettel and Charles Leclerc has robbed them of a chance to analyse the new package.

"Charles was very good in accepting the blame for the accident but it doesn't help. That said, it's sport and these things can happen - and now it looks like the engineers back at the factory have a lot of work to do."