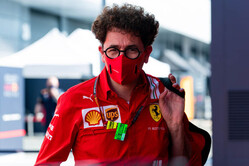 While it was anticipated that Renault, the team that lodged the original protests against the RP20, would appeal, Ferrari and McLaren got there first as the row over the decision escalates.

"We can confirm that we have just stated our intention to appeal against this morning's FIA Stewards' decision regarding Racing Point,” said Ferrari in a brief statement, while McLaren confirmed that too has lodged notification with the FIA.

Earlier in the day, Mattia Binotto admitted that his team was considering its options.

"Obviously it's a 14 page verdict and I think we need to go through it very carefully, pay attention on what has been written," he said. "One thing that is important is that it has somehow been clarified that there has been a breach of regulation. I think that is the starting point.

"Obviously that is relative to the braking ducts," he continued, "but there is an entire concept behind, which is about copying: are we allowed to copy or not, an entire concept. The two things need to be split.

"On the braking duct there is a breach of regulation, that is a fact and it has been clarified. Is the penalty sufficient or not? Again, I think we need to go through carefully the 14 pages.

"There are 24 hours eventually for an intention of appeal. I think as Ferrari we will be very careful in understanding and deciding what is the next step."

"Like Mattia we are still reviewing the document," said Zak Brown. "My initial reactions are that Racing Point has been found guilty and I am concerned that they still have those... what were deemed illegal in Austria on the race car now. I think that is confusing for the fans, how something that is not legal in Austria is still on the car.

"Around this whole copying, obviously they claimed that they had coped the car via photography," he continued. "It's clear from reading the document that is BS and therefore you have to question anything else around that car.

"I think this is, potentially, the tip of the iceberg," he warned, "the starting point of looking at what's happened here, because I don't think it's healthy for the sport.

"The constructor gets the penalty, but the drivers don't. As teams we all compete with each other, but then all the drivers compete with each other and they're able to keep their points when driver drivers are fighting for the Drivers' Championship. So, I think it's thrown up a lot more questions than answers and there's new evidence that we've now been able to see and it's something we are going to review quickly and understand the appeal process and whether that's something that we potentially want to participate in."

Earlier, Toto Wolff has explained how teams use spy photography and 3D cameras to copy parts from other teams. Asked if it is possible, by the use of such methods, to copy a complete F1 car to the extent that Racing Point did with last year's Mercedes, Binotto said: "I think it's very difficult or likely impossible.

"You see that has never happened in 70 years of Formula 1, it means that it's not an idea that someone simply thought about today but simply because we believe that it's not possible to simply copy and understand the full concept behind the car.

"I don't think that the verdict of today is sufficient because again it's only relative, eventually, to the brake ducts but not the entire concept so as Zak said, I think it's only the... it's like an iceberg, at the moment it's only the tip of the iceberg.

"There is much to discuss further. I think that if it has never happened so far, in all the history of F1, you know it means that somehow it's almost impossible to do."

"I agree with what Mattia has said," added Brown. "If it was that easy it would have been done before.

"The sport's been around a long time. The engineers and designers do take inspiration, if you like, from the things they say on the car, to be able to replicate a car as they've done.

"Everything that I've been told by people who are much smarter than me on this topic say there's no way you do it with a degree of accuracy that they can, so I think the brake ducts and the... revealing that they had information beyond photography just begs and question of what else wasn't done by photography?"