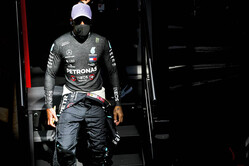 Valtteri set the pace in first practice, with Lewis just 0.039s behind in P2. Lewis finished the second session in P1, with Valtteri in P2.

The team focused on long and short run tyre performance during the two practice sessions.

Lewis Hamilton: It's definitely been quite tough out there today. I don't think I've ever been to Spain when it's been this hot. The weather is beautiful, but it's tricky for the car and very tough on the tyres as well. It's also been quite windy and that can make it difficult out there, but it's a good challenge. It's been a positive day, particularly the second session which went better for me. We didn't see any blistering, the tyres felt OK and the long runs didn't look too bad, but we also didn't see any blistering last Friday, so we'll have to remain careful. We'll debrief this evening and see where we stand and what we can do to improve. The Red Bulls look very close to us on the long runs, so we can expect another close race here.

Valtteri Bottas: It's been a good day for us, and we've gained plenty of learnings. It's a nice feeling to be back on track here and feeling the improvements of the car since we were last here, back in pre-season testing. The car felt good out there, but obviously there's some fine-tuning to do. The morning session was a bit better for me today than the afternoon. I struggled with some understeer at the beginning of FP1, but that was quite easy to fix, and it felt a lot better by the end of the session. We did long runs on all of the tyre compounds today and I didn't experience any blistering, so there will be lots of learnings for us to look into in order to really maximise tyre performance here. We're looking strong but the main thing will be Sunday with these temperatures and whether we can keep these tyres in a good condition.

Andrew Shovlin: It's been pretty hot here today with the air temperature around 30°C and the track around 50°C. Our programme was fairly standard, mainly trying to learn about the tyres in the hot conditions. Our single-lap pace looks promising, we seem to be getting the Soft tyre to work fairly well in particular. The long-run is more of a challenge and the area we need to work on tonight. The story looks similar to recent races; we're reasonable compared to all cars except Verstappen - with him it looks very close. The strategy options are fairly open here both with the number of stops and start tyre - as such it's important that we can find a bit more pace before Sunday.