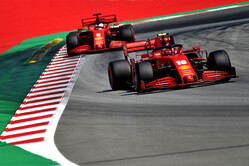 Charles Leclerc and Sebastian Vettel will start from the fifth and sixth rows of the grid respectively for the 50th Spanish Grand Prix, when it gets underway tomorrow at 15.10 at the Barcelona-Catalunya circuit, with the Monegasque ninth, two places ahead of his team-mate.

For this Saturday in Montmelo, track temperature was 51 degrees as the cars started the session. Both SF1000s began with Soft tyres and on the first run Charles posted a 1:17.540 and Seb managed a 1:17.900. The track was evolving rapidly as both drivers fitted a new set of the same compound to improve: Vettel to 1:17.037 and Leclerc to 1:17.256, to comfortably move through to Q2.

They then took to the track for the second phase immediately running the Soft tyres, the only possible choice as the times through the field were so close that qualifying on the Mediums would have been impossible for everyone. Charles' first run produced a good 1:16.953, while Sebastian stopped the clocks in 1:17.395. They then pitted for another set of new Softs to try and improve. However, with the track temperature rising steadily, it was not a given and Leclerc was unable to improve, but he had done enough to get to Q3. Sebastian moved up to tenth with a 1:17.168, just 5 thousandths off Alex Albon in the Red Bull. The last car across the line was Lando Norris in the McLaren whose time was just two thousandths faster than Vettel's thus relegating the Ferrari man to eleventh place. It might not turn out to be so bad for Sebastian, because elimination in Q2 gives the driver a free tyre choice for the start and ahead of him will be ten drivers on the Soft compound, all of whom could probably suffer after a few laps on the boiling hot track surface.

Charles had a single set of new Softs for the final part of qualifying, but he went out for a first run on used tyres to do a 1:17.297. Then with the new set he improved to 1:17.087, just three thousandths slower than Norris, yet again, to ensure he starts from ninth on the grid for tomorrow's race.

Charles Leclerc: "I am disappointed with our quali result. I was not very happy with the car today. At the beginning of quali it was not too bad but then I had a lot of understeer, which was getting worse and worse after every session and I just could not drive around this issue. We need to look into it and understand how we can fix it, because in the end P9 is disappointing. We were just not fast enough on our quick lap. Tomorrow we will be starting on Softs, which is not the best tyre here, and people behind us will start on Medium and Hard, probably the best strategy, so it won't be easy."

Sebastian Vettel: "I was very close to making the cut to Q3, as two thousands of a second is a very small gap. I tried everything and for sure it is a shame to be that close and not get through. I've been struggling all weekend to find the right balance. However, we have to look at the positives and with a free choice of tyres for tomorrow, hopefully we can do something different. We have tonight to think about that.

"Overall today, the first sector was ok, but then in the middle one the car started to be more and more nervous, I struggled in particular in turn 7, but also turn 5 was very tricky. The final sector was better, but there too, it wasn't easy to find the right balance. Now we have to study the data in order to find some answers that could be helpful for the race."

Laurent Mekies Sporting Director: "It was a difficult qualifying, with Charles' ninth place and Sebastian's eleventh pretty similar to last week's performance. We were unable to optimise the car performance as the track evolved and we paid a high price for that with our grid positions. If you look at by how little Sebastian missed the cut to Q3 and then Charles' performance in the final part, it's clear that a very small improvement would have delivered a better result. Having said that, we have to work out why the car balance was far from ideal this afternoon.

"It will be a difficult race tomorrow with high temperatures giving the drivers, cars and tyres a hard time. In fact, tyre management will be one of the key factors, with several strategy options available. It will be up to us to make the best of it. In the last two races, we managed it and we'd like to do the same again tomorrow. Our aim is for both our drivers to finish as high up the order as possible in the points, trying to defend our third place in the Constructors' Championship, which has to be our minimum target for the season."