Hamilton admits to being "in a different zone" 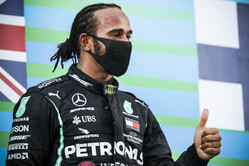 While the Spanish Grand Prix - despite the official F1 website's claim that Barcelona has hosted many "epic races" - lived up to the epithet Borecelona, this should not detract from a superb performance from the world champion.

Despite Mercedes insistence on playing the underdog card, Lewis Hamilton did head into the race aware that, based on last week's evidence, he would face stiff opposition.

Undaunted, the Briton scored his 88th win, moved ahead of Michael Schumacher in terms of most podium appearances, while taking another significant step towards that seventh title.

"I was in a different zone, I didn't even realise it was the last lap," said the Briton at race end. "I was just in a daze out there... I was ready to keep going," he laughed.

"It was a real surprise because we had this problem with the tyres," he admitted. "Management was very, very good and ultimately our understanding of what happened last week that we brought into this weekend has inevitably enabled us to do what we did today.

"I didn't even know it was the last lap at the end. That's how zoned in I was. I was ready to keep going."

In the final stages of the race, while the team wanted to pit him for softs, the Briton disagreed and called for mediums, a decision the ultimately proved the right way to go.

"As I came to understand that I could make the tyres (last) longer than we had planned I was even potentially going for a one-stop," he admitted. "But I think the strategy we had was just right. There was no need to take the risk of going on the soft tyre so I had a fresh, brand new medium tyres, which I think was best."

Asked if his comments about being "dazed" and "in a different zone" were in any way related to Ayrton Senna's claims of near 'out of body' experiences in the car, Hamilton said: "No, I wouldn't say that it was anything... I wouldn't describe it the same way as Ayrton would.

"I think today... I think ultimately there is an immense amount of pressure on all of us to perform weekend in, weekend out and I think the goal is always to - in the chase for perfection and being in that zone, you could be very, very close but still be slightly out and not be quite in your perfect rhythm.

"But for whatever reason, today I don't know, I can't quite pinpoint why, but today I felt like I was in the most... it was like a clear zone, the clarity that I had today whilst I was driving was... I'm sure I've had it before but as I said, it not always... I don't even know how to really get into that zone, I don't know what... it's hard to say what helps you get into that space but of course I will evaluate this weekend and the feeling today but honestly I felt fantastic in the car.

"It was physically challenging but in terms of not making any mistakes, delivering lap upon lap upon lap, I was in a perfect zone and that's the zone that I dream of being in.

"Of course, I never would have expected to have a lead of 24s, that's definitely not what we thought we'd have coming to this weekend, but I really put it down to that... even when I was catching traffic I was gaining time rather than losing time which is never the case. Normally you lose time with traffic and today wasn't the case. There were all these elements, which were just perfectly in place and I was very, very centred in my core; got to try and get there every week, every day."

"At the moment he drives in a league of his own," team boss, Toto Wolff subsequently told Sky Sports. "Totally under control, switching back the engine to save some mileage for races that are more difficult.

"The most special thing was at the end we were ready to put soft tyres on his car because it was not enough laps left, and it was the logical choice, and he said 'don't give me the softs, give me the mediums'. It was absolutely instinctive understanding.

"What makes me the most happy is that after a difficult weekend in Silverstone and a very hot tarmac we have been able to recover, take the right conclusions and win in the same conditions," he added.

"I said to Christian (Horner) 'bring on the heat'," he laughed. "When you have such a great win, you can properly rub it in."