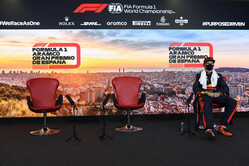 Valtteri, how frustrating was that. That was so close, I think it was seven hundredths of a second. You tried your best eh?
Valtteri Bottas: Yeah, I knew it was going to be close with Lewis as always and in the end in his first run the lap was really nice and clean, especially in sector three. All day today I've been (inaudible) in sector three, so it was getting better and better, but still not quite good enough. Of course it's annoying but he did a good job and as team again, first row.

Is it quite simply that you have to get into Turn 1 first or is there more to it?
VB: I'll try to get there first. Trust me.

Lewis, 92nd pole, your fifth in Barcelona. How difficult was that session? Because the temperatures are so high, something that you guys are not used to at all.
Lewis Hamilton: I mean it's summer man! But it's definitely the first time I've been in Barcelona when it's this hot. It's tough. It's so fast around here. It's the fastest we've ever been around here. The forces through your body are pretty intense. The tyres are what we're really struggling with. You see us crawling around on the out lap, it's just to keep temperature out of the tyres. But even with those sort of laps you still have temperatures rising. That's what we are trying to manage on the laps. I couldn't go quicker on my second lap. I thought I could but it just wasn't a great lap. The first one was decent I guess, which did the job thankfully. These guys do such an awesome job. We're constantly learning. I was here with the guys until 10pm, just looking over all the details, how we can improve and what are the areas, particularly for the race, that we could get better, because these Red Bulls are super fast.

Give us an idea of how difficult it is to drive around this circuit in these hot conditions. What are your problems - is it understeer or oversteer?
LH: The problems are all physical. The amount that you are able to brake now, the amount you have to apply to the brake is even heavier before, so there is a lot of stress through your core. You're flat out through three and through nine, so there is a lot of stress on your neck and your whole body just wants to move to the side of the car. As it's so hot you have to be even more careful on the throttle not to overheat the tyres. Balance-wise it's quite windy, if you look at the flags. We have a headwind into Turn 1 so it's pretty good into Turn 1 but then in Turn 4 you have a tailwind, Turn 9 you have a tailwind, 10 you have a tailwind, so there are corners where you know you can push and some that you can't and you are still trying to find that limit and that's when the car snaps away. But that's what we all do and I have a huge amount of respect for all the guys here who are battling the same issues as myself.

Briefly about tomorrow. Starting on pole position, the perfect place but you've got Valtteri who was so close to you in qualifying and Max is there as well?
LH: Yeah, it's such a long way down to Turn 1 here, so the job is not done that's for sure. It's very hard to follow here. Positioning is good but it will be hard to hold pole position, but that's what I've got to work on and try to get the best out of it I can.

Max, I suppose that was what you were expecting to happen today. Were you happy with the performance?
Max Verstappen: Yeah, I mean that's the maximum we can do at the moment. The whole weekend we have been P3 so yeah, pretty happy with that. I just hope we can be a bit closer in the race. Yesterday in the long runs it didn't seem to bad but of course tomorrow is a different day so we'll have to see.

You had some good long runs, do you expect it to come your way tomorrow? Do you expect to challenge the Mercedes?
MV: Difficult to say at the moment. I felt happy in the car. I just hope that I can apply a bit of pressure. I know that it is very hard to overtake around here, but we're going to do everything we can to be close to them and top try to make a bit difficult.

Lewis, thrilling session. You were fastest in all three sessions of qualifying, how satisfied are you with pole number 92?
LH: It's definitely been a good Saturday. I'm smiling under this. But it had been a really big challenge this weekend for us all - the physical demands of this track, being that we're faster than ever before, but more so just managing these tyres in the temperatures. It's very, very hot out there and as you can see different people were trying different things on out laps. Also there is always a bit of a gust in the afternoon always here in Barcelona, so it makes for quite a tricky session but overnight progressed forwards rather than backwards, which is always a good thing. Each first lap was strong, which I was happy with. The one in Q3 was solid, but I felt like I could improve, but I wasn't able to do it on the second lap. Fortunately neither did the strong dude next to me. He's keeping me honest and it's obviously very close between us and so every millisecond counts. I'm really just incredibly grateful to the guys for continuing to push. It's not easy to do weekend in, weekend out. I'm constantly impressed by the open-mindedness and the things we are doing. But tomorrow is going to be tough when we get to the race. The scenario is different. Over a single lap we seem to have the edge over the Red Bulls but this weekend we seem to be pretty much on par on race pace, so it's going to be a tough battle with Max tomorrow.

Lewis, you've told us many times that you are not motivated by stats, but that is your 150th front-row start in F1. What does that mean?
LH: Wow! I don't know really what to say except for... Look, we are the ones who get to sit here and front all this incredible effort from so many people and I have been really, really fortunate over the years, even back to my McLaren days, to work with incredibly intelligent and driven people who have helped me sit in this room. So I am incredibly grateful to those that have helped. And blown away, still to this day, by the decision to move to this team and see the growth that we have had. I don't' think we have plateaued at the top with the championships we have, we continuously get better each year, as people see. I've been saying for a long time that I am a chink in the chain, without realising that chink is not actually a good thing. I'm just another link in the big chain of so many people and I just try to play my part as best I can.

Let's come to you now Valtteri, so fast in that qualifying session, fastest, in fact, in Sectors One and Two - but you weren't able to grab pole. Are you a little bit frustrated?
VB: Well, for sure, you know I was trying to get the pole and it was always going to be pretty close, I think between me and Lewis at least, and I knew it was going to be about milliseconds in the end. Sector 1 and 2 started to feel pretty good, so I think by Sector 3... I have to say since this morning Sector 3 was a bit of a problematic Turn 10, Turn 12 was a bit of an issue for me in terms of balance and finding the best way around it, because every day here, with the wind, with the track temperatures different but it was getting better and better in the qualifying - just not quite good enough. I think Lewis was pretty consistent in Sector 3 and he managed to get a good lap in Q3. So yeah, he did a better job today. Of course, it's annoying for me but I have to look at the big picture. Still starting on the front row, really strong team performance, which always I'm really proud of. And still, there's all the opportunities for tomorrow.

How much slippier, compared to normal is this track, in these track temperatures, off-line? Because you're starting on the inside tomorrow. It's going to be a drag race down to Turn 1. Do you think it's going to be difficult to make a good start from P2.
VB: I have no idea, to be honest, how the track conditions is left and right. Normally we get all that information in the reports. The team will analyse that. For now, I don't know. I hope it will be good enough grip to grab the lead.

Max, congratulations, your first top three start here in Barcelona. Was it a clean session for you?
MV: Yeah. I mean it seems like I have a subscription on P3. I think I've been P3 the whole weekend. It was alright. I tried of course, to be as close as possible. Also, pretty happy with my lap. I think we extracted the most out of the car. We can't complain really. I think the car was pretty competitive. Of course there are still areas where we can do a better job - but we are definitely improving the car, which is good.

And have you got the car underneath you to beat the guys next to you tomorrow in the race?
MV: Well, I felt very happy in the long run yesterday, with the balance of the car and the wear of the tyres as well. But yeah, tomorrow again, is a new day and we'll have to try and show it again. Of course, I hope that I can be close to them and put the pressure on.