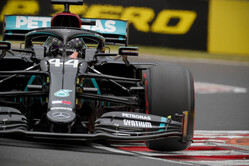 Heading in to today's qualifying session there is a certain sense of déjà vu.

Just seven days ago we saw Max Verstappen take the brave gamble of seeking to make it through Q2 on the hard tyres, while all those around stuck resolutely with the mediums. The following day that gamble paid off... in spades.

Today, as temperatures soar, we wait to see if the Dutchman and his team will take another gamble and whether Mercedes has learned from its Silverstone mistakes.

While Lewis Hamilton was quickest in FP2 and again in FP3, the quickest time thus far this weekend is actually his teammate's from the opening session, while Verstappen and Ricciardo are next up with times they posted yesterday afternoon. Of this morning's times, of the leading ten, only Sainz, Perez and Gasly posted their best times of the weekend.

In other words, in many ways we appear to be heading into the unknown.

A number of teams are also witnessing differences between their drivers' performances - most notably McLaren - while drivers who looked good yesterday - Ricciardo and Grosjean - have lost pace today.

While drivers gave the softs a wide berth last weekend, this will not be the case today. However, with some complaining that they are destroyed after as few as 5 laps, who will attempt to qualify on them?

Such is the 'fragility' of the softs that driver have not only been opting for two cool-down laps, more often than not the drivers slow to a crawl, and this has led to traffic issues.

Indeed, as we witnessed at Silverstone - one of the longest tracks on the calendar - drivers are bunching up to the extent that they are causing one another serious problems.

Indeed, there was such an incident earlier, Esteban Ocon damaging the front of his Renault after almost tripping up over a slowing Kevin Magnussen.

Deeming that neither driver was to blame the stewards opted to take no further action.

However, with 20 cars on track in Q1, and view of other recent near misses, this appears to be an accident waiting to happen.

Ahead of Q1, the air temperature is 30.9 degrees C, and the track temperature 49.4 degrees.

The lights go green and the Williams pair are the first out, as, sadly, will be the case in 18 minutes.

As the pair complete their cool-down laps, Verstappen and the Mercedes pair head out, all sporting softs.

The three trade fastest sectors as they are joined by the Ferraris and a number of others.

A 17.540 sees Leclerc go fourth, ahead of Norris, Vettel and Kvyat.

Stroll splits the Mercedes with a 17.316, despite no purples. Moments later, the Canadian is demoted by his Racing Point teammate who posts 17.117.

Sainz goes sixth with a 17.438, ahead of Leclerc, Gasly, Ricciardo and Albon.

The stewards have noted an incident involving Magnussen and Kvyat.

After running wide and over the kerbs in the final corner, Giovinazzi asks his team to check the floor on his Alfa.

With 3:00 remaining the final assault gets underway, with the Bulls and Black Arrows heading out. Only the Racing Points appear to have settled for their times.

As expected, traffic is an issue.

Lots of green in S1 but Norris goes purple, only for Kvyat to go quicker.

Raikkonen goes13th but is demoted when Vettel improves to ninth.

Sainz goes ninth, and Raikkonen makes the cut by the skin of his teeth.

The Mercedes pair are first out for Q2, both on the red-banded rubber. They are subsequently joined by Albon, Verstappen, Albon, Norris and Ocon. Again, all are on softs.

Bottas is the quicker of the pair in S1, though Hamilton has the edge in the second sector.

Perez goes quickest in S1, and while he maintains a strong pace in S1 a mistake in the final complex proves costly, he crosses the line at 17.036 to go fifth.

Verstappen is told to look after his tyres as they are his potential race start set.

As the drivers head back to their garages, Vettel, Ocon, Gasly, Kvyat and Raikkonen comprise the drop zone, with Ricciardo, Albon and Norris hovering.

Now, the question is, will anyone bolt on a set of mediums?

Predictably, they head out as one, all sticking with the softs. Hamilton, Bottas and Verstappen staying put in their garages.

There are 8 cars in a crocodile, all jostling for position. Ridiculous.

A PB in S1 for Leclerc, whilst Perez goes quickest. Albon also has a good opening sector, as does Kvyat.

Leclerc remains fifth, but is instantly demoted by Perez (16.936).

Sainz remains fourth, while Kvyat goes tenth only to be demoted when Vettel leapfrogs him.

A late improvement for Norris drops Vettel into the drop zone as Gasly goes fifth.