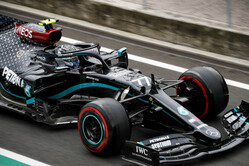 Ahead of today's opening session, the air temperature is 28 degrees C, while the track temperature is 35.9 degrees. The sky is blue with barely a cloud, and Race Control helpfully advises that there is 0% chance of rain.

After two weeks in quarantine, Sergio Perez is back in the Racing Point today, while at Williams Roy Nissany makes his much anticipated FP1debut.

Other than the various rows involving Racing Point and Mercedes, the big issue this weekend is going to be the heat and its effect on tyres, particularly for the German team.

Max Verstappen, who won last week's Anniversary race at Silverstone and on his debut for Red Bull here in 2016 is the driver most likely to benefit should Mercedes worst fears be realised.

"As from today, Kvyat will run a second PU," reveals Honda, "which brings him into line with the other three Honda drivers. On Gasly's car, we have fitted a second CE, so that all major components for all four drivers have now been changed once."

The lights go green and Stroll leads the way, followed by Vettel, Giovinazzi, Grosjean, Leclerc and Sainz. A mixture of all three compounds.

Nissany is an early riser, Verstappen giving the Williams driver plenty of space as he exits the pitlane.

Leclerc's Ferrari sporting the mother of all aero rakes at the back of the SF1000.

The German subsequently improves to 22.879, while his teammate pits.

When Vettel follows the example of his teammate and pits the circuit falls silent. Seven minutes in and all bar the Mercedes drivers have been out.

As was the case at Silverstone, Kvyat is unhappy with his headrest.

There appears to be an issue with Albon's car as the Thai driver climbs from his car as crew members begin removing cables.

After several minutes of inactivity, Ocon heads out in the Renault. However, after just one lap... he pits.

At which point Verstappen and Latifi head out, the Red Bull on hards and the Williams on softs.

As Verstappen begins his first flying lap, a number of other drivers head out.

Sainz, who like Vettel has a new chassis, posts a 20.038 to go second, only to be demoted when Bottas, who appears from nowhere, goes quickest with an 18.575. The Finn is on mediums.

All bar Kvyat and Hamilton are on track.

Quickest in the first two sectors, Bottas shave two-thousandths off his previous best, while Verstappen improves to 19.552.

Despite being 0.979s up on Verstappen, Bottas is told he's losing out to the Dutchman in Turn 15.

At which point, 26 minutes in, Hamilton heads out.

Hamilton posts an exploratory 39.751 as Albon complains of understeer.

Nissany finally posts a time, and it is 5.040s off the pace.

As Gasly complains his car doesn't "feel so great", Raikkonen is lucky not to take out a very slow Perez in Turn 14.

At 40 minutes, when the teams hand back a set of tyres, it's: Hamilton, Bottas, Perez, Verstappen, Stroll, Ocon, Ricciardo, Grosjean, Leclerc and Albon.

At which point Kvyat finally heads out, hopefully with his headrest issue sorted.

Benefiting from a clear track the Russian subsequently posts 20.078 to go 15th.

Ricciardo and the Haas pair head out to keep Kvyat company, the Russian subsequently improving to sixth with a 19.160.

Kvyat reports that his car feels "quite edgy" in a number of corners. He is on the softs.

Indeed, as more drivers head out, most are sporting the red-banded rubber, including Magnussen who improves from 19th to 5th with an 18.690. Teammate Grosjean posts 18.573 to go second.

Hamilton (softs) complains of a vibration on his front tyres.

Third-placed Grosjean - yes Grosjean - is 1.506s off the pace of the Mercedes.

Complaining of low grip at the front, Ricciardo pits for a new front wing.

Magnussen goes fourth on the softs (18.620), ahead of Perez, Sainz, Ocon and Norris.

The Ferrari pair - currently 15th (Leclerc) and 18th - head out on fresh softs.

Having gone quickest in the first sector, Hamilton visibly backs off.

Out come the yellows as Nissany spins in Turn 10. The Israeli is currently 0.3s off Latifi's pace.

"I've lost power," reports Albon. The Thai driver is told to play it safe and pit.

Having spent far more time in the pits than he would have wished, Gasly finally heads out again.

Verstappen told to "go easy on the tyres through 3 and 9".

Bottas reports that he nearly hit a bird, which came close to clipping his helmet.

The race sims are well underway now, as Hamilton reports his left-front, which is just 11 laps old, is "opening a bit".

Hamilton runs wide and over the kerbs at the final chicane but stays out.

With 7:00 remaining all bar the Ferraris are on track.

Most drivers are on softs, and most are experiencing issues of one sort or another.

As the clock counts down the Ferrari pair head out on fresh softs.